And we have come to the end of our second batch of Premiership Player Profiles today, after gavh featured Kieran Richardson at the beginning of the week, I will be completing the second batch with on loan Portsmouth striker Frederic Piquionne. Following this profile, a third batch of profiles will be on it’s way starting with the bottom club of the Premiership, all the way to the top. But for now, enjoy the final profile of the second batch, Frederic Piquionne.

Frederic Piquionne is a forward currently attached to French team Olympique Lyon, but currently playing for Portsmouth on loan.
Piquionne has spent all of his senior career in France until his recent loan move to Fratton Park in 2009.
Before his loan move to Portsmouth, Piquionne had featured 19 times for Lyon, scoring just two goals in that time. Piquionne is on loan at Fratton Park from Lyon

In what has been a difficult season for Portsmouth, both on and off the pitch, Piquionne has featured 30 times for the club.
He has 5 league goals to his name and 11 goals in all competitions. Although Portsmouth have been relegated from the Premier League, during their battle for survival, Piquionne scored goals which were vital at the time including a goal in a 2-0 victory over Liverpool.
Although their relegation to the Championship, Portsmouth have endured a brilliant run in the F.A Cup, which last weekend saw them reach the final for the second time in 3 years. The 31 year old scored the first goal in their 2-0 victory over Tottenham Hotspurs at Wembley.

Piquionne celebrates his goal which led Pompey to victory in the F.A Cup semi-final.

Piquionne represented the Martinique National team at the 2003 CONCACAF Gold Cup.
However, in 2007, he was called up to the France National team against Lithuania but didn’t play. Four days later, however, he made his National team debut against Austria in a friendly.
Since then, Piquionne has only featured for the France B side.

Piquionne has currently one cap to his name for France. 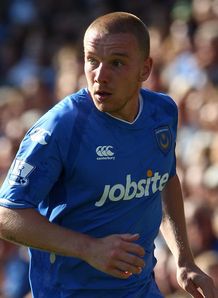