Scott Parker is a central midfielder currently attached to West Ham United.
Parker had started his career at Charlton Athletic and after breaking into the first team, he tallied 145 appearances for the club before leaving for Chelsea in a £10 million deal.
However, with Chelsea splashing the cash on several new players, appearances became limited for Parker as he slipped down the pecking order, mainly being used as a substitute. The following season, the former Charlton midfielder was sold to Newcastle for £6.5 million after making just 28 appearances for the Blues.
The 29 year old instantly became a regular at St James’ Park and was praised for his consistant performances throughout the season.
Parker enjoyed a great spell at the Magpies and was even promoted to captain by Glenn Roeder. However, in 2007 he transferred to West Ham United for £7 million. Following his move to Upton Park, Parker has been an ever presence in the Hammers’ first team. His performances have led to shouts for the 29 year old to be named in Fabio Capello’s England squad for the World Cup 2010.
Parker is held in high regard by the West Ham faithful and at the end of the 2008/2009 campaign, the former Chelsea man was named ‘Hammer of the year’ by the clubs fans.
He is often praised for his hard tackling and his no nonsense approach to a match with also the ability to both defend and attack constantly throughout the match. Parker in action earlier this season against Everton.

His consistant performances for West Ham and previously, Newcastle, have led to shouts for a call up to the England team.
The 29 year old has already featured for the England senior team with 3 caps to his name, making his first appearance in 2003 in the 3-2 defeat to Denmark.
He featured in the European Championship’s qualifier against Croatia, and with the attacking Frank Lampard and Steven Gerrard, Parker was seen as the perfect midfielder to support the defense.
With his superb performances for the Hammers, Parker has a great chance to be called up to the England World Cup squad this summer, as a few regulars in the squad have not been playing to the best of their ability. Parker currently has three caps for England and could be called up to the World Cup squad this summer. 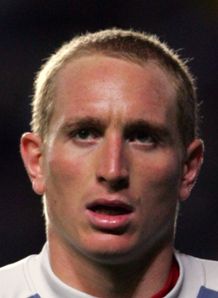