Are they back? I mean properly back

Does Arsenal’s almost symbolic victory this Monday finally show the breakthrough for a team who, despite brilliant football have been unable to secure a trophy for the past five years.

A few weeks ago, West Ham played a very early “save our season” day, the result, an emphatic win. Have Arsenal done slightly the same thing here? In recent press conferences Arsene Wenger all but branded this game, “save our title race”, it worked. Arsenal were indeed a class above their London opponents. Chelsea, being lackluster in the past few games seemed to rely solely on Didier Drogba’s ability to shine against Arsenal. A decent early beginning for the visitors and Drogba skewing a shot wide spelled trouble. It was not to be as after twenty minutes Arsenal settled into their rhythm and held the ball, creating, harrowing. A penalty appeal was turned down and Samir Nasri was denied acrobatically by Cech and still Arsenal pressed. On the stroke of half-time Alex Song played a neat one-two with Jack Wilshere and finished, with the aplomb and  style a striker would have been proud of. Twice in two minutes at the beginning of the second half allowed Cesc Fabregas to stroke home from a Walcott cross and then Walcott himself to finish beautifully after Michael Essien was dispossessed.

What was wrong with Chelsea today?

A lack of self-believe was the main problem for the Blues today. They relied heavily on Drogba, whose magical goal-scoring record against the Gunners was not put to show today. They desperately missed Nicolas Anelka on the right flank, who is more important than people may think. Malouda, who has flourished was absent and substituted at the beginning of the second half. Salomon Kalou was for the best part of the game, ineffectual to say the least. Chelsea were not carried by the driving force that usually is Michael Essien. He was simply not creative enough, not applying his amazing passing range to good mesure. Obi Mikel was poor in front of the defence, he was unable to cover for John Terry and Branislav Ivanovic and let the likes of Cesc Fabregas and Jack Wilshere in far too easily. Frank Lampard was mostly unable to make an effect as well. To his defence however, he has just returned from four months out and is far from match fitness. Chelsea were definitely having an off-form day. An over reliance on Didier Drogba and a midfield unable to control, attack or defend effectively made Chelsea suffer defeat at the Emirates. 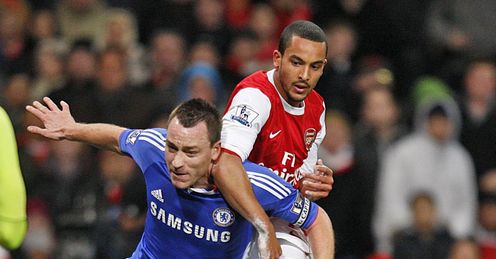 But what was so good about Arsenal?

Their passing game was as usual very effective. They seem to have the ability to pick each other out effortlessly, Cesc Fabregas pulled the strings from midfield and allowed space and time  for his team-mates. Jack Wilshere was also able to deliver some piercing through balls, one in particular which just evaded Marouane Chamakh. Every man on the team seems to be able to play anywhere on the pitch, this fact was demonstrated by Alex Song scoring with a deft touch, one which a striker would have been proud of. Walcott’s finishing seems to have improved as well, despite a poor first touch in the first half which should have been a goal he kept his head up and had a very good game. He cancelled out the threat posed by Ashley Cole’s runs and he harrowed and attacked the Chelsea defence with pace and direct runs. he scored a wonderful goal and added an assist to complete a very effective display. This also seemed to be the day when Gael Clichy was not crossing to the opposite corner flag and that Bakary Sagna was not hitting the ball to the first defender, in other words, the crosses were on target for once. 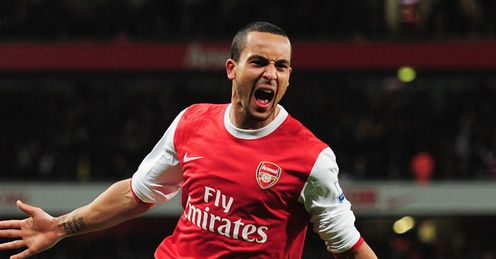 However, I think that Arsenal’s main strength last night came from the closing down of their opponents very rapidly and very effectively.

Some like to state that Arsenal is the English Barcelona. In many ways this is true, a creative midfield, a game built on rapid passing, a questionable keeper and a two midfield superstars in Cesc Fabregas/Samir Nasri and their Spanish counterparts Xavi/Andres Iniesta. There is one main difference that can make the sides so different. I have watched Barcelona over recent weeks and noted that upon losing the ball they are very different from Arsenal. When Barcelona lose the ball they press very high up, very fast. They attack in packs, hungry for the ball. This would explain why they have such high possession ratings every match. In that respect, they are a class above. I am not comparing Arsenal to Barcelona, simply stating that in some respects they are alike.

Last night, Arsenal did exactly that. They pressed very high and outnumbered Chelsea in midfield. They won the ball instantly and then used it to attack, often with success. Chelsea were allowed little space or time, Arsenal’s young legs seemed too much for the much more aged Chelsea squad. Arsenal will have to keep up their impressive passing and closing down if they are to win against Barcelona in the Champions League.﻿

Arsenal were good but Chelsea were dire, Arsene Wenger got it right. Is this enough for Arsenal to press forward and achieve the potential that Arsene Wenger has been talking about for many years now? We hope so.

10 games, 7 starts, 5 goals. With the same scoring average as Tevez, Is Balotelli as bad as he’s painted?
Who is Manchester City’s Mario Balotelli?