It has been another eventful season in the Scottish Premier League and here is my team of the year.  I don’t think it would be right to include players who have played for half the season.  Shouts go out to players who left the league in January i.e. Kenny Miller of Rangers who scored 21 league goals from August to January and Conor Sammon of Kilmarnock who netted 15 times for the Ayrshire club.  Miller packed his bags for a sunshine-filled career in Turkey with Bursaspor for a fee of £400,000, and Sammon fulfilled a dream to play in England’s top flight by joining Wigan Athletic.

McGregor has been in tremendous form for Rangers this season, making a number of great saves that have saved Rangers from dropping points.  He has become Scotland’s number one keeper ahead of Craig Gordon. Perhaps his best save of the season to date came in Easter Sunday’s derby with Celtic, where he saved Samaras’ 84th minute penalty with an immaculate reaction save.  He has been linked with Arsenal in the past few years and Rangers are worried they might lose him and have offered him a four year contract extension.

The versatile defender as been an ever-present in the Rangers defence, largely at his favourite right back position but also a few games at centre half covering for Bougherra.  He has contributed his fair share of goals as well as becoming the Ibrox club’s penalty taker.  Whittaker is a very effective defender who can play right across the back line and midfield.

Zaliukas has been at the heart of the Jambos defence which mounted a title challenge this year.  An unsung hero for Hearts, he won the player of the month in December 2010 and after finally signing a new contract he has become a strong Hearts captain.

Originally signed as a left-back from Aberdeen, Mulgrew moved to centre-back to accomodate the centre back problem at Celtic and to allow Izaguirre to be at left-back.  He has been a steady performer for Celtic and a calming influence at the back.  He has been a big factor in their defence conceding so few amount of goals in the league.

With bursting overlapping runs from left back, Izaguirre has been Celtic’s best player of the season.  He has set up many goals with his crosses and his ability to defend and help in attack has proved vital for Lennon’s side.  A prime example of his play was Hooper’s 2nd goal in the 3-0 victory over Rangers in February.

Voted the Rangers Player of the Year, Naismith has really started to prove his potential this campaign.  Chipping in with 14 goals from right midfield, he cemented his place in the champions first 11 with a great first half of the season.  After a slight dip in form Naismith has recovered scoring two exquisite goals in a 5-0 rout away to Motherwell.

Celtic’s anchor in midfield, Kayal has wowed Parkhead with solid performances from the midfield engine room.  Showing he has a scoring ability to his game also, the Israeli has been a great signing for Lennon.   He won January’s player of the month award.

A stroke of genius by departed manager Paatelainen, the Finnish international has lit the SPL up with his dazzling attacking performances.  He has played a pivotal role in the great way Kilmarnock play football and has been linked with both sides of the Old Firm as well others in England. 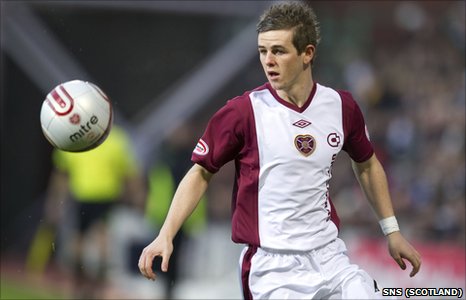 The young midfielder has excited the Hearts fans with his skillful displays at Tynecastle and other stadiums and has helped Hearts to a most likely third spot finish.  Templeton was arguably Hearts best player especially when they were running the Old Firm close in a title challenge that died away.

After signing from Scunthorpe United, few would have imagined Hooper having such an impact.  He is the SPL’s leading goalscorer and his goals have been crucial to Celtic’s championship quest.  With a finishing style akin to ex-Rangers striker Kris Boyd, Hooper has been the man to simply put the ball in the net in so many games for Celtic.

The Croatian international has proved his £4m price tag to Walter Smith with 16 goals in 24 appearances for Rangers.  The quality of his goals has impressed the Rangers support and overall displays as the leading centre forward has kept Rangers in the title race. His spectacular overhead kick at Aberdeen a few weeks ago was voted goal of the season by his fellow professionals. One of his goals included a match-winning shot past Celtic keeper Fraser Forster to win Rangers the League Cup.