As it gives me an unquantifiable level of joy to write, Stoke City all but secured Premier League survival today with a narrow win over struggling Blackburn at the Britannia Stadium. Liam Lawrence scored the only goal of the game fifteen minutes from time, one of only two shots on target in a generally dreadful match, the other also coming from the winger. While the result lifts the Potters into the comfort of eleventh place and mid-table, it sees Blackburn slide down to seventeeth position, just one place clear of the relegation zone they will fight to avoid in the coming weeks.

Made nervous by their sides’ on-pitch skirmish, Tony Pulis and Sam Allardyce battle for the ball

Stoke manager Tony Pulis was able to name the same starting eleven for the third match in a row, which must be some kind of record in recent years, with James Beattie coming through after suffering a head wound during the 1-1 draw with Newcastle last week to face the club he supported as a boy and began his career at. Meanwhile, Stoke captain Abdoulaye Faye maintained his place in the centre of defence against the club who reportedly tried to sign him in January, managed by Sam Allardyce, who was in charge of both Bolton and Newcastle when the Senegalese was at the clubs.

After last week’s 4-0 thrashing at the hands of Liverpool, Blackburn were able to welcome back three dangerous attacking players in Benni McCarthy, Morten Gamst Pedersen and opposing fans’ favourite El Hadji Diouf, while South African midfielder Aaron Mokoena, who has been linked with a move to the Potteries when his contract at Blackburn expires in the summer, also started the game alongside former Stoke loanee Keith Andrews, who played sixteen games for the Potters back in 2003.

In a first half all but void of incident, Stoke would start with an attacking verve that belied the forty five minutes to come, with Beattie coming close to netting his nineteenth goal of the season inside two minutes, when he diverted Glenn Whelan’s wayward shot narrowly high and wide of Blackburn ‘keeper Paul Robinson’s goal. With the visiting defence already rattled, Stoke created another good chance minutes later, with a suspiciously offside Ricardo Fuller breaking down the right wing before knocking in a disappointing ball with which Matthew Etherington failed to connect when the situation looked promising.

Unfortunately however, that was to be the last passage of decent or exciting football we would see for the rest of the half, with the game looking more like a “which team can look more laboured getting forward” contest than a football match. The one major talking point of the half came not through the actions of any player, but from referee Howard Webb, who as the generally accepted best referee the Premier League has to offer disappointed me greatly.

After turning his man, the leviathan Christopher Samba, inside the Blackburn box, Fuller appeared to be brought down, with both sets of players stopping expecting the award of the penalty. Webb, however, was not forthcoming, waving the strong appeals of the Stoke players away. Fuller does have something of a reputation as a player who goes to ground easily, and I feel this may have influenced Webb in his decision, but I felt in this case a penalty should have been given, particularly as Fuller would have had a clear chance to shoot otherwise, so a dive in the position would have been very stupid as well as shameful, though I wouldn’t quite put it past the man who drove in Britain for eight years without possessing a British driving license. The TV replays may later of course, prove me wrong and Webb right, but only if Match of the Day can bring themselves to accept that Stoke made a foray into the opposition’s penalty area that didn’t come as a result of a set piece.

It is telling that there was more incident during the half time incident than the first half itself, with Faye being booked after an incident in the tunnel as the teams left the pitch. Stoke did start the second half better though, and began to create a couple of chances. First, Lawrence saw his fierce drive tipped over the crossbar by Robinson, before he picked out Etherington at the back post with a precise cross. Running at full speed, however, the former West Ham man was unable to direct his header on target, powering in wide. In truth, the Blackburn defence had stood up well to all Stoke’s attacks, both aerially and on the ground, and the game seemed to be heading for a goalless outcome, despite the slight increase in urgency seen in Stoke’s play.

Blackburn stood up well to almost everything in the air

This was to change with fifteen minutes left on the clock, when after the visitors had cheaply squandered possession, Stoke left-back Danny Higginbotham hit a typical high ball into their box. Beattie rose highest, winning a rare header and knocking it down to Lawrence, who took an excellent first touch to take the ball down and get around his marker before hitting a left footed shot towards goal. It was by no means the cleanest of contacts, and having got a hand to it Robinson will have been disappointed not to keep it out, but the ball just had enough pace on it to trickle across the goalline, making the uncharacteristically quiet Britannia Stadium rock. Co-incidentally, in the matchday programme, Lawrence spoke of his desire to sharpen up in front of goal. Having been the Championship’s highest scoring midfielder with fifteen last season, this was only his second strike this term, the other being a penalty against Aston Villa on the second day of the season. 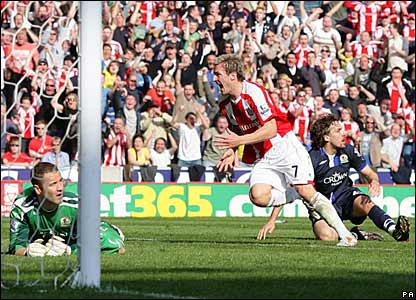 Lawrence scores and is greeted by a one-man pitch invasion

Taking the lead with fifteen minutes to go means only one thing for Stoke, everybody back, and with the incredibly haired Inrahima Sonko brought on in place of the more attacking Etherington, Blackburn had every chance to get men forward and force Stoke’s defence to crack, as Newcastle had done in similar circumstances a week before. The had not troubles Thomas Sorensen in the Stoke goal all match though, and failed to do in any meaningful way now, the Dane dealing well with a series of long balls into his box.

So, with Stoke on the back foot and happy to be, Webb blew the full time whistle to confirm an excellent result for Stoke. Though relegation is still a mathematical possibility, I can’t see many teams from the bottom half catching us now, so planning for next season can begin. The result moves the Potters up to eleventh, leapfrogging Bolton and Manchester City. If anything like this position can be maintained come May, it would spell an extremely successful first ever Premier League season for Stoke City Football Club.

Sorensen and Faye, two of the heroes of the season celebrate the win, and Faye lifts goalscorer Lawrence skyward, using just his little finger

Substitutions: Kelly for Wilkinson (50), Cresswell for Beattie (86), Sonko for Etherington (87)