Still rejoicing after Wednesday’s 4-0 win over Middlesbrough, and in the only Premier League game of the weekend, Tottenham travel to the Stadium of light to face a Sunderland side level on points with themselves. Harry Redknapp knows a win would shoot Spurs into the top ten, just one point off eighth spot.

Ledley King is expected to be back and available for selection after being rested mid-week, making Alan Hutton and Jermain Defoe the only unavailabilities for Saturday’s match. Robbie Keane and Roman Pavlyuchenko should keep their places in the team after forming an effective partnership in the 4-0 victory. Aaron Lennon is also a definite to start, following Redknapp’s effusive praise in recent weeks, and his confidence in the winger regaining his England place. Gareth Bale remains out of favour with the new boss, although Harry may just want to secure safety before trying to undo his hoodoo.

Don’t expect Redknapp to give Giovani or Taarabt places on the bench, as he continues his battle against the youngster. Gomes is also expected to keep his place in the team, after consecutive clean-sheets, and signs of overcoming bad habits. Corluka was left out of the team on Wednesday following a few poor performances, and Didier Zokora was drafted in at righ-back (Despite the availability of Chimbonda and Gunter). However, if the Ivorian adopts that role once more, I expect the team to be almost identical to the one that started versus ‘Boro:

I think it is more of a question of ‘must we win?’. A win would almost guaruntee safety, although nothing can be certain; a loss, however, would put us right back into the mix. No team has done the double over Spurs so this season, and Sunderland came out victorious when the teams met at the Lane earlier on in the season. The team should take bundles of confidence into the match, and if they play like they did mid-week, a victory is almost a certainty. However, as we know, when have Tottenham ever won 4-0 and then put in an equally classy performance in the next match. 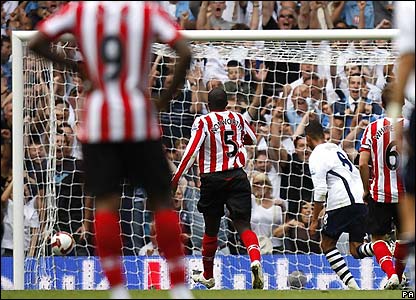 My Verdict: I reckon it will be a tight game, with a goalless first half. But goals from Keane and Jenas will be enough to secure a 2-1 victory.

The Future of THFC
Redknapp: Lennon Needs to Work on Final Ball