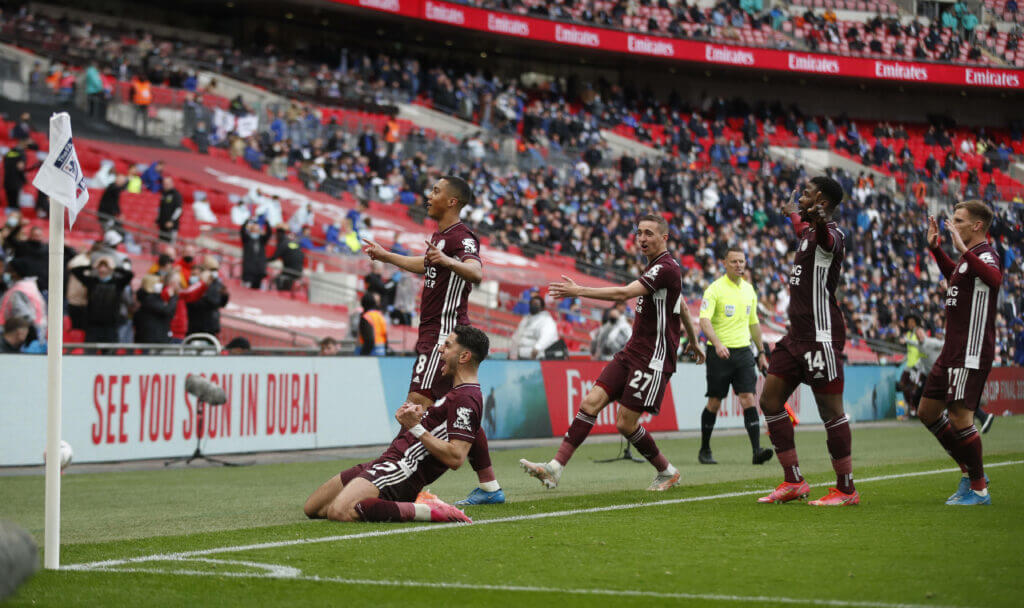 The symbolic nature of the victory ran far deeper than that, with Leicester’s victory providing football with the perfect antidote to the proposed European Super League (ESL).

Jamie Vardy’s inclusion meant that he had played in all 13 rounds of the FA Cup, giving hope to all football fans and reminding them that incredible underdog stories are still possible.

The triumph and subsequent celebrations also highlighted Khun Top and his family’s incredible love for the club and gave all owners the perfect example of how to run a football club.

The FA Cup final was truly fantastic and arguably the best in recent years, with the perfect mix of desire, emotion and quality proving dividends for the Foxes.

It Leicester’s first final appearance in 52 years and it was fitting that there were Foxes fans back at Wembley Stadium to witness it.

However, this game was important for so many other reasons.

After weeks and weeks of hearing about the ESL and the catastrophic plans that were set to ruin football, Leicester’s win was a victory for football and, in particular, football fans.

Leicester are not a massive commercial enterprise, nor were they invited to join the ESL, but they have now won the Premier League and now the FA Cup in the last five years.

The Foxes have lost big players, like Riyad Mahrez, Harry Maguire, Ben Chilwell and N’Golo Kante, for big money, but crucially they have had the infrastructure in the club to recruit some fantastic replacements.

They have not spent billions of pounds on new players, but they have found an excellent manager and some talented young players while retaining some of the ‘Old Guard’ that won Leicester the league in 2016.

Let’s not forget Leicester were still in the Championship in 2014, which really shows their dramatic rise to the top.

So maybe you don’t need to watch the best clubs play each other every week, maybe you just need to dream.

The proposed plans for the ESL threatened to take that dream out of football.

But, they have failed because dreaming is what football is all about. It is also what the world’s oldest football competition is about, so Leicester’s victory will be celebrated by not just Leicester fans but by football fans too.

The first time for the Foxes

The win was Leicester’s first ever FA Cup win, having lost in all four of their previous finals.

Three of those cup final defeats came during the sixties, but there certainly seems to be a new dawn in Leicester and Brendan Rodgers is at the heart of it all.

The former Celtic man had won all six of his previous finals and his presence in the dugout ensured that it was fifth time lucky for the Foxes.

Leicester have now won a clean sweep of all the domestic cups in the 21st century, but there could yet be more success for the Foxes.

While it might well be the last piece of silverware for Wes Morgan, Kasper Schmeichel, Jamie Vardy and co, Rodgers has built an exciting young team that could yet go onto win more trophies.

The English striker’s rags-to-riches tale will go down in Premier League folklore and Vardy’s appearance in the FA Cup final meant that he became the first-ever footballer to play in every single round of the competition.

His goalscoring prowess underpinned the club’s against-all-odds 2016 title win, while his infectious, full-blooded approach to celebrating his finishes has made him one of the most popular characters in the game.

One of football’s latest bloomers, Vardy has established himself as one of the world’s most prolific finishers and the 34-year-old’s incredible story has provided aspiring footballers with a dream to follow.

The footballer started off as a factory worker but is ending his career as a Premier League and an FA Cup winner – a bold message to never give up on your dreams.

A tribute to Khun Vichai

Following the lifting of the cup, Khun Top, the CEO of Leicester owners King Power and the son of the late Vichai Srivaddhanaprabha, went down to pitchside and was quickly welcomed with hugs by the players.

Before the match, Rodgers had spoken about winning in memory of Khun Vichai and the whole occasion was tinged with emotion throughout, as Leicester did it for the man they called, ‘the boss’.

Vichai had pledged to take Leicester to the top of English football when he took over at the club – a promise that, at the time, would have seemed quite absurd.

However, that unlikely success did prevail in one of the biggest sporting stories of all time and his involvement in that success was enough to secure his status as a legendary figure with the Leicester fans.

Vichai’s involvement in every aspect of the club and the community at Leicester was what made his relationship with the fans so special.

However, three years ago, tragedy struck as a horrific helicopter accident resulted in the death of the much-loved Leicester owner.

Since his death, his family have continued to run his football club in the same loving and brilliant way that Vichai had run it himself.

Leicester’s FA Cup triumph, their first trophy since the passing of Vichai, is not just for the team but for ‘the boss’.

2021 FA Cup Final: Over land and sea (and Leicester)
Morning Mix: Henderson not the answer for United, Ndidi delivers a midfield masterclass