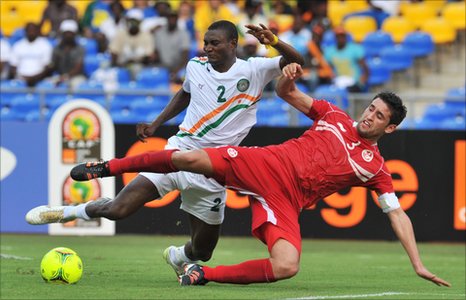 Isaam Jemaa came off the bench to fire lacklustre Tunisia to an 89th-minute winner and send them to the top of Group C with six points, with Gabon up against Morocco later tonight.

Youssef Msakni scored another superb solo effort in the fourth minute when he dribbled and ran past the Niger defence with ease to slot home the opener.  But a goalkeeping error from Aymen Mathlouthi was pounced upon by William Tonji Ngounou who headed home to give Niger their first African Cup of Nations goal four minutes later.  Tunisia’s top scorer Jemaa came on at half-time and that change paid off as he cut inside the box to smartly finish into the net and give his nation a late winner in the Group C tie.

With Tunisia now top of the group with six points, it will take an unlikely sequence of results for them not to make the quarter finals for the fourth time in five Nations Cups.  The result was harsh on Niger who go crashing out the tournament after two games, and it could have been a different story if they had taken their chances in the game. 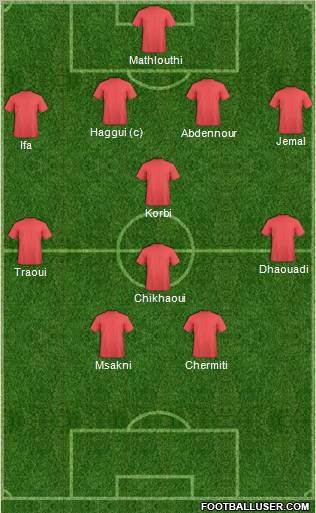 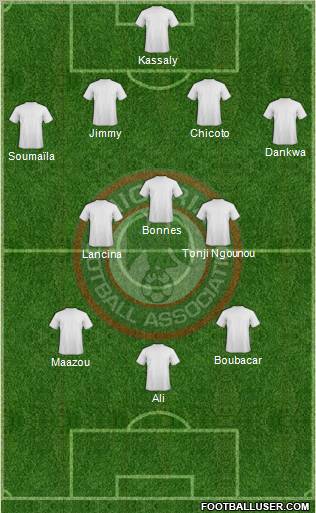 Tunisia took the lead in the fourth minute through the impressive Msakni, as he mirrored his debut goal against Morocco by driving against the Niger defence and cooly slotting home past the Niger goalkeeper Daouda Kassaly’s left-hand side.  His mazy run was impressive but not one Niger defender challenged him as he made his way to score the opening goal.  It was a massive early blow for Niger’s slim chances of getting a positive result, but for Tunisia it set them up perfectly to carry on their good form.

That was thrown out the window a few minutes later however as Niger got a quick equaliser.  The ball was played up and led into the box, where Tunisia keeper Aymen Mathouthi made a meal of catching the ball which led to it going straight into the path of William Tonji Ngounou who comfortably headed home into an empty net to spark wild celebrations amongst the noisy and colourful Niger support.  Mathlouthi claimed for handball for the incident where he failed to catch the ball but the replays were inconclusive.

Niger’s number two Moussa Maazou had a fantastic chance in the 17th minute, when played played through on goal, blasted well over having got one-on-one with Mathlouthi to the right hand-side of the box.  Tunisia’s defensive pace was exposed in that chance for perhaps the first time in the Cup of Nations tournament.

The minnows continued much in the same vein in the first half, with Maazou once again impressing and using his strength and turn of pace to get past the Tunisia centre-backs and put the ball agonisingly wide for Niger.  And eight minutes later they forced Mathlouthi to save onto the post, and from the resulting corner the goalie didn’t look too clever in dealing with the aerial flight.  Mathlouthi had a superb game against Morocco on Monday with many shot-stoppers but was not challenged at set-pieces, and here Niger were aware of this weakness.

The game went rather quiet until the second half where Tunisia hit the post through substitute Isaam Jemaa.  The record Tunisian marksman was a doubt for the group stages through injury but came on at half-time and was unlucky with his shot from inside the box.

Niger’s impressive Maazou had run out of steam after a powerful opening 45 minutes but when supplied with the ball, still had enough in the tank to cause Tunisia problems.  As the game had twenty minutes to play, Tunisia looked like the most likely to grab a second goal but were becoming frustrated at not penetrating the Niger defence.

They got the breakthrough eventually however to break Niger’s hearts.  Jemaa scored his 27th Tunisian goal to surely fire his country into the quarter finals of the competition, netting in the 89th minute of the game.  The ball was played through from Aymen Abdennour and Jemaa pounced on it, cutting inside two Niger defenders before calmly placing past Kassaly to win it for the Carthage Eagles.  His celebration summed up Tunisia’s feeling of relief and joy at winning the game.

The late winner for Tunisia was extremely harsh on a hard-working Niger side and it was almost made worse right at the end when another substitute Oussama Darragi flicked the ball up away from the keeper before unleashing a half-volley onto the crossbar, the ball bouncing a yard away from the line and then cleared away to safety.  The playmaker, who was expected to start in the games, had a decent 45 minutes and will have surely done enough to replace a poor Yassine Chikhaoui in the next game.

Niger’s Moussa Maazou was impressive throughout and caused the Tunisia defence all sorts of problems.  The 23-year-old’s pace and upper body strength was getting the better of centre-backs Karim Haggui and Aymen Abdennour who were made to look like retired players.  Maazou should have had at least a goal to his name but his best chance came in the first half where he blasted well over and should have put it away.  The Zulte Waregem forward, on loan from CSKA Moscow, will have alerted many European clubs with this bustling and energetic performance. 8/10