A superb solo run from forward Gervinho gave Ivory Coast a 1-0 victory over Mali in the African Cup of Nations semi final and set up an all–orange final clash with Zambia on Sunday.

The first half goal from the Arsenal forward was the only goal in the game and the clean sheet for the Ivorians means they haven’t conceded in the whole tournament so far.  Gervinho settled a tight game on the stroke of half-time as he ran unimpeded from the halfway line to curl home the match-winner from close range.  It was a deserved victory for Francois Zahoui’s side and they go on now to take part in the final knowing they have a great chance of winning the cup for the first time since their sole victory in 1992.

In the other semi final Ghana were shocked by surprise package Zambia 1–0, the result knocking out one of the pre–tournament favourites and allowing the Zambians to participate in their first ever African Cup of Nations final. 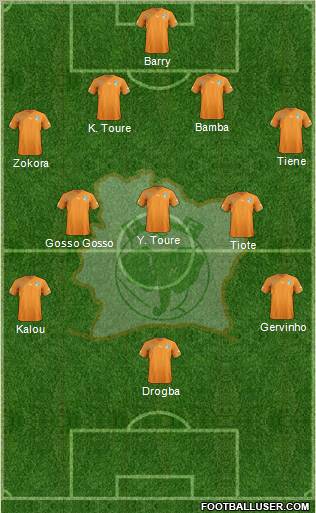 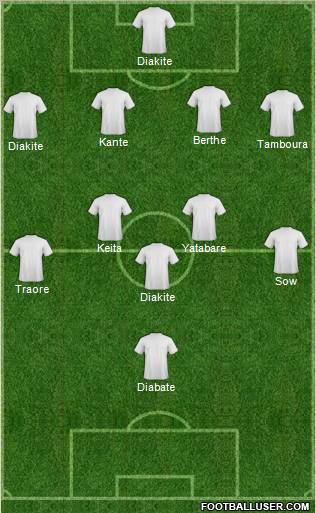 Mali coach Alain Giresse made two changes to the team that was victorious against Gabon inm the quarter final, replacing injured duo Modibo Maiga and Abdou Traore with Mustapha Yatabare and Tidiane Cheick Diabate. The latter scored that all-important late equaliser against Gabon in Sunday’s quarter-final.

For the Elephants, coach Francois Zahoui made three changes to his line-up. Out went Max Gradel, Arthur Boka and Kafoumba Coulibaly, to be replaced by the fully fit again Salomon Kalou, Cheik Tiote and Siaka Tiene.

There were some big names watching from the stands at the Stade d’Agondje in Libreville, with Gabon President Ali Bongo mixing with UEFA President Michel Platini and Brazilian legend Pele.  They weren’t treated to a rush of goals in this tight affair, but there was plenty of ability, hard work and passion being showcased by the orange of Ivory Coast and the white of Mali.

The first chance fell the way of Ivory Coast’s captain and talisman Didier Drogba.  They won a free kick near the corner flag just five minutes into the game and the delivery of the cross was met by the powerful Chelsea striker, whose headed effort smacked off the post.  It was a sign of intent from the Elephants that they were determined to reach the final.

After the first fifteen minutes or so, the Mali defence were taking a battering but were holding up pretty well.  After seeing Drogba hit the woodwork, fellow English Premier League player Yaya Toure repeated theaction, this time hitting the bar with a shot from eight yards out after a nice lay off from Saloman Kalou.  The Mali fans breathed a huge sigh of relief, and perhaps a bit of frustration that their team couldn’t threaten the Ivorians at the other end.

After 35 minutes in the semi final clash in Gabon, Mali were having a decent amount of possession but were failing to get that final ball just right.  The Ivory Coast defensive backline were solid and were taking no prisoners, Kolo Toure and Souleyman Bamba cutting rather imposing figures at centre back.

Ivory Coast finally got the breakthrough after a series of good opportunities had been wasted, with Gervinho’s individual goal coming right on the stroke of half time.  The Arsenal winger took the ball on a run for 55 yards, starting from his own half and finishing a few yards from the goalkeeper, where he curled past Mali goalkeeper  Soumaila Diakite for the opening goal.  It was a terrific run from Gervinho but serious questions have to be asked of the Mali defence for allowing him to run with the ball for so long unchallenged.

The second half was a much more scrappy affair with both teams losing the ball in possession on regular occasions and players were receiving knocks from careless fouls by the opposition.  The game suited Ivory Coast however, as they had the all important goal in the game to lead it.

As the clock ticked towards the end of the game, the Malian players rarely gave Ivory Coast keeper Boubacar Barry a save to make and didn’t trouble their defence too much.  Without much incident, Ivory Coast played down the time to the end of the game, plus its four minutes added on time.  Their fans sensed the game was all over once the added time board went up, as the hordes of orange jumped up and down.  There were an estimated 7,000 fans from the Ivory Coast and they were not afraid to show their delight.

Their joy was shortlived as the final whistle blew, sending them to the final to face Zambia.  The Elephants were joint favourites to win the whole competition along with Ghana but now the Black Stars are out, few will bet against a Drogba-led Ivory Coast who have yet to concede a single goal in the tournament so far.

Manchester City’s combative midfielder Yaya Toure is a vital cog in the machine of his club and country and proved that with his performance.  He bossed the midfield from start to finish and was unluvky to not have got his name on the score-sheet when his close-range shot smacked off the upright in the first half.  Toure will be instrumental in the final no doubt and if Zambia are to get past Ivory Coast, they will need to somehow stop the powerful midfielder from doing his job.  8/10