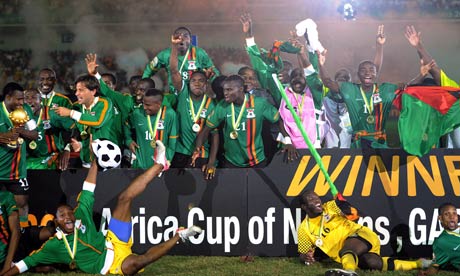 Zambia shocked Ivory Coast to win the 2012 African Cup of Nations after winning a marathon penalty shoot-out 8-7 at the Stade d’Angondje.

Zambian centre-back Stoppila Sunzu converted the winning penalty after English Premier League duo Kolo Toure and Gervinho had missed for the Ivory Coast, with fellow Zambian Rainford Kalaba also missing.  The game had finished in 0-0 at the end of the 90 minutes, and the two nations played out the thirty minutes in extra-time without either managing to break the deadlock.  Didier Drogba converted his penalty in the shoot-out but that will not console the Chelsea forward, who blasted a 70th-minute spot kick well over the bar in what would have won the Nations Cup for the Elephants.

Nineteen years after a plane crash killed 18 members of their squad in Libreville, the Chipolopolo returned to the Gabon capital to record the most famous victory in the country’s history.  Manager Herve Renard dedicated the team’s historic victory to the players that lose their lives in the tragic horror in 1993.  He said: “I told them if we got to the final we would play in Gabon where the plane crashed. There was a special significance in that.  They found the strength. I don’t know where“.

It is Zambia’s first ever African Cup of Nations tournament win, but serious doubts have to be cast over the Ivory Coast side with the plethora of talent that the Elephants possess.  The Ivorians were gracious in defeat but they will know deep down that this was there was best chance to win the competition for a second time in the history of the games. 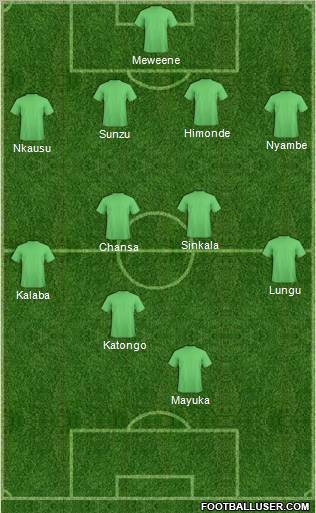 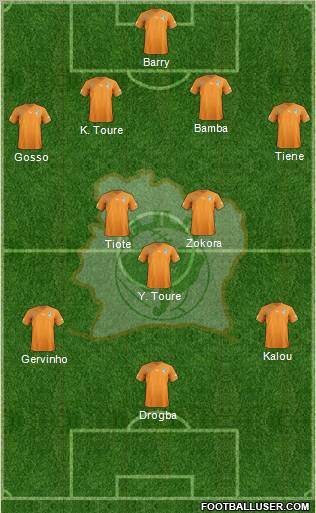 The big news regarding the teams was that Zambia’s top scorer in the tournament Emmanuel Mayuka came in for James Chamanga after scoring the winner in the semi-final against Ghana. Chisamba Lungu joined the midfield with Francis Kasonde dropping to the bench and Davies Nkausu moving into defence.  Ivory Coast were unchanged after they beat Mali in their semi, with Didier Drogba flanked by Salomon Kalou and Gervinho and backed up by Yaya Toure.

The game started off at a fairly low tempo with both sides centre-backs having a lot of time on the ball, and attacks were patiently built up from back to front.  The first chance came for Zambia from a corner, Nathan Sinkala’s low drive superbly saved by Ivory Coast goalkeeper Boubacar Barry low to his right.  This was the second minute of the final and Zambia were signalling their intent to the Ivorians.

With half an hour played, Ivory Coast finally mustered up a chance.  A clever back heel from Drogba picked out Yaya Toure but the Manchester City midfielder failed to find the target from eight yards.  A poor finish from Toure and he should have opened the scoring for his country, instead the game remained at a deadlock but Ivory Coast were starting to get into the game and it looked like they would kick on from there.

BBC Sport’s Nick Cavell typed from inside the stadium as the first half drew to a close.  He said: “Both sides are playing the way they have been most comfortable with throughout the tournament. Zambia are pushing forward and Ivory Coast are soaking up the pressure and breaking on the counter attack. You get the impression that a lot of the neutrals here are backing Zambia, judging by the huge cheers every time they go forward. But it might also be Ivorian fans cheering their team’s defending!”

In the second half, both teams were looking dangerous on the break but lacked a real ability to finish the moves off in the final third.  While Zambia were more than holding their own, the Ivory Coast were the team putting the most pressure on and the team in the ascendancy.  Although Zambia’s tactic of short-corner-taking was nearly catching out Ivory Coast every time they tried it.

When Isaac Chansa fouled Gervinho just inside the penalty area and the referee pointed to the spot, the Ivory Coast fans must have thought this was it.  The 70th-minute penalty was a chance for Drogba to be an Ivorian hero, even more so than he is now.  The captain blasted his penalty well high over the bar however, prompting Zambia goalkeeper Kennedy Mweene to rub salt in the wounds so yo speak, by doing a John Cena-esque waving hand to Drogba.  It was a huge moment in the game and the Zambia fans would have believed that they were done and dusted when Drogba ran up to hit the ball.  But with twenty minutes to go, the pendulum had swung.

Max Gradel missed a great chance for Ivory Coast near the end, the substitute dragging the ball wide after shooting from inside the box.  The thirty minutes of extra time began and it was Zambia who came closest this time round.  The woodwork was rattled when Felix Katongo met his brother Chris’ cross at the back post, only to be denied by Ivory Coast keeper Boubacar Barry who did superbly to tip the effort onto the post and away to safety.

Sub Gradel was doing extremely well for the Ivorians on the left, doing a much more efficient job than Salomon Kalou whom he replaced.  His pacey attributes were getting the better of the Zambian right hand side but there was no-one to convert the dangerous crosses that he was providing from that flank.

No goal happened in the game and it finished 0-0 after 90 minutes plus 30 of extra time.  It meant Ivory Coast went the whole African Cup of Nations finals without conceding a single goal.  Huge credit must go to centre-backs Kolo Toure and Soulyeman Bamba.

The dreaded penalty shoot-out was played out as tension was the name of the game on the pitch and in the stands.  Both teams scored seven penalties in the staggering shoot-out before Kolo Toure missed for the Ivorians.  Zambia’s  Rainford Kalaba also missed after him, but when Gervinho also missed for the Ivory Coast, it was centre-back Stoppila Sunzu who had the chance to create history.  He did just that, and sparked wild celebrations on the pitch, in the stands and all over Zambia.  No doubt the deceased Zambian players that lost their lives from the crash will have been jumping about upstairs, as well.

Special award goes to the Zambian nation as a whole.  Congratulations. 10/10