Manchester United would have to play without Rooney, but boosted by the return of Phil Jones. David De Gea started, despite a string of impressive performances by Lindegaard. Ferguson assigned a new task for Rafael — playing at central midfield. Valencia stayed at right back position. Danny Welbeck joined the on-fire Berbatov and Hernandez forming the attacking trio. Anderson was back from injury, being the most experienced player on the bench.
Blackburn earned an inspiring draw at Anfield behind Mark Bunn’s brilliant performance. They would be missing David Dunn and Junior Hoilett. Petrovic would protect the backline led by Samba with N’Zonzi. Rochina and Formica would be the primary support for Yakubu.
Play of the Game
Manchester United: In 72th min, United was piling on the pressure. Off a poor clearance by Pedersen, Valencia made a direct run past Henley and grabbed the assist when his cross was converted by Berbatov’s to put United to level.
Blackburn: Mark Bunn had ensured Blackburn heading back to the dressing room at half time with a lead. Two minutes from half time, he flied to his left to push away Nani’s shot. A moment later, Hernandez closed range shot from tight angle was blocked again by the well-positioned goalkeeper.
Key Moment 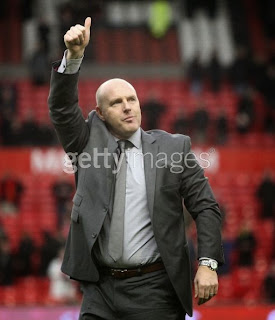 Steven Kean concluded his turbulent 2011
with a victory at Old Trafford
Anecdotes
It was only around lunchtime, but Ryan Giggs’ son had already fallen asleep in the first half, showing zero interest to the Manchester United side, who performed poorly without his dad.
Verdict
Manchester United
Complacency had costed United a crucial three points. Although enjoying most of the possession, there was little movement in attack and could only occasionally threaten Blackburn with Nani’s long shots. The second half had improved, benefited from a more direct approach of Valencia, but De Gea had undone Berbatov’s effort. Ferguson will be questioned again with his goalkeeper choice. United has also suffered from a lack of spiritual leader on the field. Hernandez has lost the sharpness, but Anderson produced an encouraging performance, which might be the only birthday gift for sir Alex tonight.
Blackburn
It must have been the most enjoyable week for Steve Kean. He certainly knows how to play against the top teams, and four valuable points might have saved his job. Nevertheless, Blackburn still has a long way to go. They have yet again given away the lead far too casually. Apart from Yakubu, they can rely on nobody in
goalscoring. Rochina could not endure his strong early season and had been wasteful. Pedersen underperforms no matter playing as left back or central midfielder. They may need one or two January signings to strengthen the squad.
Best Performer of the Game
Yakubu. He demonstrated the perfect example of how to play against a top team as a lone striker. He did not shy away from tracking back to help linking the defence and offence. With his only chance in the game, he utilised his superior physical strength to beat the soft Carrick and soared past De Gea with a delicate finish. Hardworking as ever, he deservedly earned the Man of the Match award.
Who could do better?
David De Gea. The Spanish goalkeeper is nowhere near his compatriots, at least at this stage. While Lindegaard had showed commands both in the air and on the ground, De Gea disappointed United with another unconvincing performance. The language barrier looks as if an ongoing problem when Jones and Carrick did not seem to be connecting well with De Gea. The fans will be missing Edwin Van Der Sar even more.

Blackburn’s Steve, Kean despite the critics
To protest or not to protest? That is the question.