After an excellent away draw at Aston Villa and a comfortable home win over Bolton in our last two games, Stoke will have their work cut out to continue their good run of form this Saturday, making the trip to Wembley bound FA Cup semi-finalists Everton. The Toffees, under the guidance of David Moyes, also look a good bet to play European football once again next season, currently sitting in sixth position in the Premier League.

When the two clubs last met, back in September, it was Everton who took all three points from the Britannia Stadium, a feat matched only by Manchester United and Chelsea, the current top two, Tim Cahill heading the winner in a 3-2 victory after Stoke showed all the naivety and rawness you might expect from a newly promoted side to lose the game in the last fifteen minutes, after dragging ourselves back from 2-0 down to 2-2. Over time, however, as we have become accostemed to the Premier League, we have definitely toughened up, and in our last away game, at Villa it was us who were exploiting defensive deficiencies to claim a late result, scoring twice in the last three minutes of the match to rescue a 2-2 draw from a seemingly hopeless position. Villa are one of the few teams above Everton in the league, so the result of two weeks ago will give Stoke some hope that we can pull off another surprising away result. Cahill’strademark header gave Everton the win at Stoke in September

Stoke manager Tony Pulis could well name an unchanged side to face Everton from the one that beat Bolton, which would be a novelty given his chopping and changing of our line-up in recent weeks, as defensive duo AbdoulayeFaye and Andy Wilkinson have both shaken off knocks picked up against Bolton to be fit to play. Meanwhile, left-winger Matthew Etherington will play for the first time in five weeks after serving a three match suspension for his sending off away at Sunderland, but it’s quite likely he’ll start on the bench because of his lack of sharpness and seeing as Liam Lawrence has recently re-cemented his place out wide for the Potters. Personally, I’d prefer Etheringtonto play, as I’ve not been impressed with Lawrence recently and Etheringtonalways gives us that welcome extra bit of width and class when he plays. Former Toffees forward, and Stoke City hero in the making James Beattie should start the game. while one-time Everton goalkeeper Steve Simonsen is also likely to be amongst the Stoke substitutes. 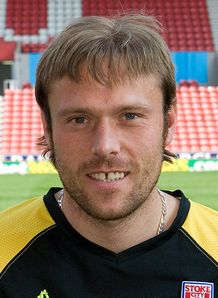 The hosts will be without their undisputed best player, Spanish midfielder Mikel Arteta, who is out for the season with a knee injury, making the trip seem a little less daunting for Stoke. Nigerian forward Victor Anichebewill also miss out after recently being the victim of a horror tackle from Newcastle’s Kevin Nolan, a challenge that left him with damaged ligaments in his leg. It’s hard to find humour in such a situation, but I had to chuckle when Anichebe claimed that he wasn’t too badly injured because he has two very strong legs, and that had the tackle been on anyone else, their legs would have snapped in half. Full-back Tony Hibbert will return to Moyes’s squad though, after recovering from a thigh injury, while Louis Saha could start in attack.

Anichebe’s two strong legs are tested to the maximum

Few people will be expecting Stoke to come away with anything from tomorrow’s match, but then again it would have been a foolish man to bet against Aston Villa two weeks ago and we proved a match for them. As we saw earlier in the season, Everton’s backline can be suspect to aerial balls, particularly Rory Delap long-throws. It’s therefore important for Stoke to exploit this as much as possible and for target man Mamady Sidibe to be on top form alongside James Beattie if we are to get another unexpected and vital away result.

Louis Saha v Abdoulaye Faye
Saha is set to start for Everton after a spell on the sidelines and the forward should come up against Stoke’s colossal centre-back Abdoulaye Faye in the battle for supremacy at one end of the pitch. Saha is a fine footballer, which he demonstrated in Everton’s last league game, a 2-0 win over the seemingly doomed West Brom, as he scored a classy goal. Faye, also a surprisingly good player with the ball at his feet, is likely to use his immense physical stature in an attempt to keep the Frenchman quiet. Marouanne Fellaini v Amdy Faye
Fellaini, sporting hair the likes of Simonsen can only dream of, is a vital player in Everton’s midfield, particularly in an attacking sense, already netting five goals this season. Aboulaye Faye’s Senegalese compatriot, the smaller but by no means dwarfish Amdy Faye will be charged with keeping him quiet from the defensive midfield position for Stoke. Phil Jagielka vJames Beattie
Toffees and England defender Jagielka, who was rejected by Stoke as a teenager, will have the unenviable task of facing up against the hottest striker in the Premier League of the minute, former Everton man James Beattie, who will be keen to add to his five goals and two assists in seven Stoke games at Goodison Park, where he suffered the most barren spell of his career in front of goal before joining Sheffield United in 2007, Everton taking a significant hit on the £6 million fee they had paid for him in 2005. 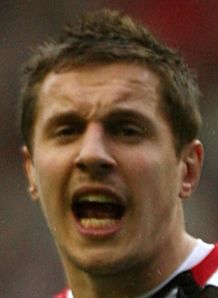 Star Man: Mikel Arteta
It is with relief that Stoke fans and players will see that Arteta is out injured for the rest of this season and will not feature in Saturday’s game, as the 26 year old Spanish midfielder is most definitely a player to strike fear into the hearts of opponents. Artetabegan his career at Spanish giants Barcelona, where he failed to establish himself, never playing for the first team, before finding himself in Britain with Rangers in 2002, via a loan spell at Paris Saint Germain. His form for Rangers earned him a £3.5 million move back to Spain with Real Sociedad in 2004, his transfer funded by the sale of his best friend Xabi Alonso to Everton’s arch rivals Liverpool but he failed to settle there, and moved first on loan, and then permanently to the Toffees a year later, for a fee of £2 million, that has now to be considered a fantastic deal for the Merseyside club.

He has since established himself as one of the finest creative midfielders in the Premier League, with his dead ball ability arguably second to none. In total, he has played 157 games for Everton, scoring 24 goals, including seven this season before his injury. The San Sebastian born Arteta was capped seven times by Spain at Under 21 level, but has never made his senior debut, though he has made one appearance for his native Basque Country, though they are not officially recognised by FIFA as a footballing nation.