An away trip to the always rowdy Bramall Lane represented a tricky draw for an Aston Villa team down on their luck and struggling at the wrong end of the Premier League table. But a fantastic solo goal from new boy Kyle Walker, followed by equally stunning strikes from Marc Albrighton and Stiliyan Petrov, sent the Midlands outfit into fourth round, much to the relief of manager Gerard Houllier.

Defeat today would have increased the pressure on the under fire Houllier, so it was no surprise to see the Frenchman name a strong side, which included Gabriel Agbonlahor despite ongoing doubts surrounding his fitness, and a rare start for compatriot Robert Pires who had a point to prove following damaging quotes about the club attributed to the midfielder in the last week.

But it was the debutant Walker, playing against the club he began his career with, who strode into the limelight as he carried the ball from just inside the halfway line and ghosted past several Blades defenders before coolly slotting the ball past Sheffield United goalkeeper Steve Simonsen to give the visitors the lead with just nine minutes gone. 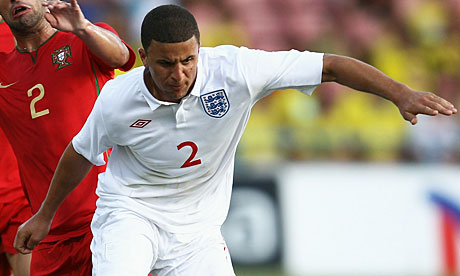 
Villa’s second too had a touch of class to it as Ashley Young’s spirited burst down the left flank resulted in the wingers perfectly weighted cross finding Marc Albrighton, making his first start since the embarrassing defeat at the hands of Manchester City, free at the far post. The youngster’s fierce volleyed finish for a 0-2 lead showed a composure rarely found in a player so young.

Sheffield United were determined to put their own recent bad form behind them however, and began the second half strongly. Indeed the hosts pulled a goal back just three minutes after the interval as former Villa trainee Jamie Ward coolly dispatched a penalty dubiously awarded for Carlos Cuellar’s apparent trip on Lee Williamson. The away side then had Brad Friedel to thank for preserving their lead with superb saves firstly from Daniel Bogdanovic, then from an acrobatic flick from Johnny Ertl, as Sheffield United sensed an equaliser was up for grabs.

Jamie Ward, who began his career with Villa, scored Sheffield United’s goal from the penalty spot

When Petrov was unable to convert a one-on-one chance laid on by Stewart Downing, and Young was banished from the game after receiving a second yellow card just minutes later, Sheffield United smelt a comeback. But they were unable to make their possession count, and Petrov put the game to bed at the second time of asking after exchanging passes with the lively Albrighton and rocketing a drive into the roof of Simonsen’s net.

Villa will be pleased to have advanced, but were given a real test by a Sheffield United team struggling at the bottom of Championship. With Young now joining Emile Heskey on the sidelines as a result of suspension, Houllier will know he has to improve his troops further for the second city derby against Birmingham at St Andrews next Sunday. A defeat in that fixture would quickly undo the boost in support Houllier will have earned off the back of today’s victory.