Holland or known by many as the Netherlands have always been a colourful outfit whatever stage they play on. The team in orange qualified comfortably for this year’s World Cup, after topping there qualifying group with a total of 24 points.

However for the fans they will be hoping for a repeat of the 1970’s success, in which Holland were able to reach two back to back World Cup finals. From 1958 to 1970 the European Country failed to qualify for every World Cup, but in the year 1974 that all changed. The Netherlands qualified for their first World Cup in four attempts, and it’s safe to say what a World Cup it was. In Germany in 1974, Holland reached the final only to lose out 2-1 to the tournament hosts.

Four years later the Netherlands repeated their fate, by reaching the 1978 World Cup final. This time the team in Orange were defeated again by the tournament hosts Argentina, 3-1 was the penultimate scoreline as two goals from Mario Kempes sent Argentina over the finishing line. After that back to back success Holland failed to qualify for the next two World Cup’s, until Italia 90 where the European country fell at the Last 16 stage.

Moving onto 1994 the Dutch international side had a very successful World Cup as they reached the Quarter Finals, in an enthralling contest Holland were edged out by eventual champions Brazil 3-2. Four years later and Holland went a stage better, this time the men in orange reached the Semi final stages, however yet again it was Brazil which halted there chances of making the World Cup final, heartbreak in a penalty shoot-out cost the Netherlands dearly. 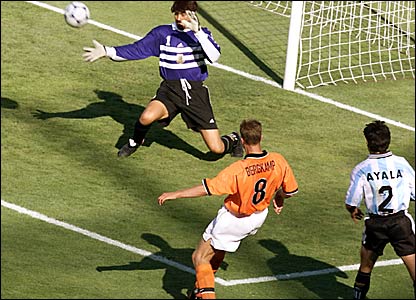 Moving onto the 21st century the first World Cup of the new millennium didn’t include the Netherlands. The 2002 World Cup, joint hosted by Korea Republic and Japan was contently won by a brilliant Brazil side. On the other hand Holland’s dream of a place in the 2002 World Cup ended disappointingly in qualification, as both Portugal and the Republic of Ireland topped the Netherlands.

Lastly after the disappointment of missing out in 2002, the Netherlands were back on the big stage in Germany. Coached by Dutch legend Marco Van Basten a hot looking Holland side, were in fine form as both them and fellow Group C side Argentina flew through the group stages. However in the Round of 16, an on form Holland side were undone in a close fought contest, only one goal separated Portugal and Holland as a single goal from Maniche ended The Flying Dutchmen’s quest of World Cup success.

This year the Dutch international side will be coached by Bert Van Marwijk, Holland are yet again one of the favourites to lift the trophy, but with a fairly tough group it might not be all plain sailing. 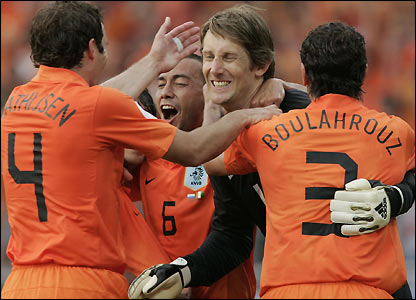