Tactical Analysis: How Tottenham Hotspur might shape up under Antonio Conte 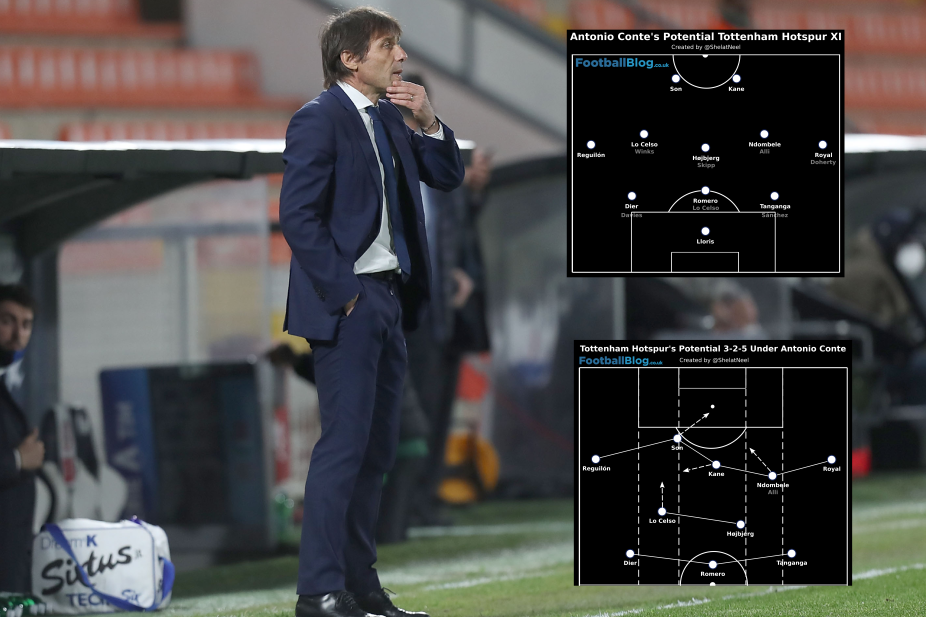 It turns out that Manchester United’s visit to the Tottenham Hotspur Stadium was indeed football’s version of the TV series ‘Squid Game’, as the losing manager was eliminated from his job.

That manager, of course, was Nuno Espirito Santo, meaning that the hot seat at Tottenham Hotspur was vacant once again.

Antonio Conte rejected the position in the summer, but roughly four months later he has accepted a new proposal and will be taking over as manager with a contract that runs until 2023.

This begs the question: How might Tottenham shape up tactically under Conte? There are quite a few possibilities, so we will go over some of them here.

The first thing everyone knows about the Italian manager is that he loves to play a back-three and favours two-striker systems, so here is how his team might look on paper:

It is clear to see that Tottenham’s current squad is actually quite suited to a back-three.

Many of the centre-backs have some experience in such a system (most notably Cristian Romero, who was a key figure at the heart of Atalanta’s defence last season), while their current full-backs also seem better fits in wing-back roles.

Their front two already have a great connection, which is another thing that Conte will like.

More importantly, it is important to understand how this side might work in possession. Conte does like to keep the ball, and he has employed various systems to do so over the years.

Most recently at Inter Milan, his team used a 4-2-4 from a 3-5-2 on paper, with one midfielder dropping back. Let’s try to translate that for our Tottenham line-up:

If this system is used, it might not be the worst idea to use Ben Davies as the left centre-back given his history as a full-back, and it is also possible that Matt Doherty might rediscover his Wolves form in a similar sort of role with more attacking freedom.

With this shape, Inter played some very vertical football with lots of one-touch relay passes and direct balls into the front two, which is something that this group of players are not entirely alien to.

The other clear option is a 3-2-5 in possession, which Conte used to great effect at Chelsea.

Heung-min Son and Harry Kane’s connection could be utilised to greater effect in this way, as the English striker will have the freedom to drift out to the left while his South Korean counterpart makes runs in behind.

Dele Alli could also be a left-field option for the right midfielder role, although it remains to be seen if he still can operate at the level of his best years in a Spurs shirt.

It is true that this system looks like it could suit this Tottenham squad better, but given its emphasis on slower and more sustained possession, it might need some time and work on the training ground before it yields serious rewards.

Moving onto defending, Conte’s sides typically don’t employ the highest of presses, but they don’t sit back either.

Therefore, a 5-3-2 mid-block with wide midfielders tasked with pushing forward when the ball is on their side might be what the Italian manager uses, just as he did at Inter.

In this defensive set-up, Pierre-Emile Højbjerg will have to move out to either side of midfield to plug the gaps left by the advancing wide midfielder, naturally vacating the central defensive midfield area.

This is where Romero’s front foot defending ability can prove crucial, as he can effectively cover that region of the pitch.

With the winter transfer window approaching, reports have suggested that Conte has been promised a sizeable budget to reinforce this team.

The two main areas that he might want to improve are the right wing-back and left centre-back positions, but he could also use back-ups in midfield and perhaps even up front, though the latter might be getting a bit too greedy.

Irrespective of new additions, the current Tottenham Hotspur squad clearly seems very fit to deploy a back-three system, and there are few better managers for that currently than Conte.

He unquestionably can turn them into serious top-four contenders this season, which means that Man United will not have an easy route to being the best of the rest this time.

The Red Devils may have picked up the three points on the weekend in a match dubbed ‘El Sackico’, but in hiring Conte, it is Tottenham who are the real winners.