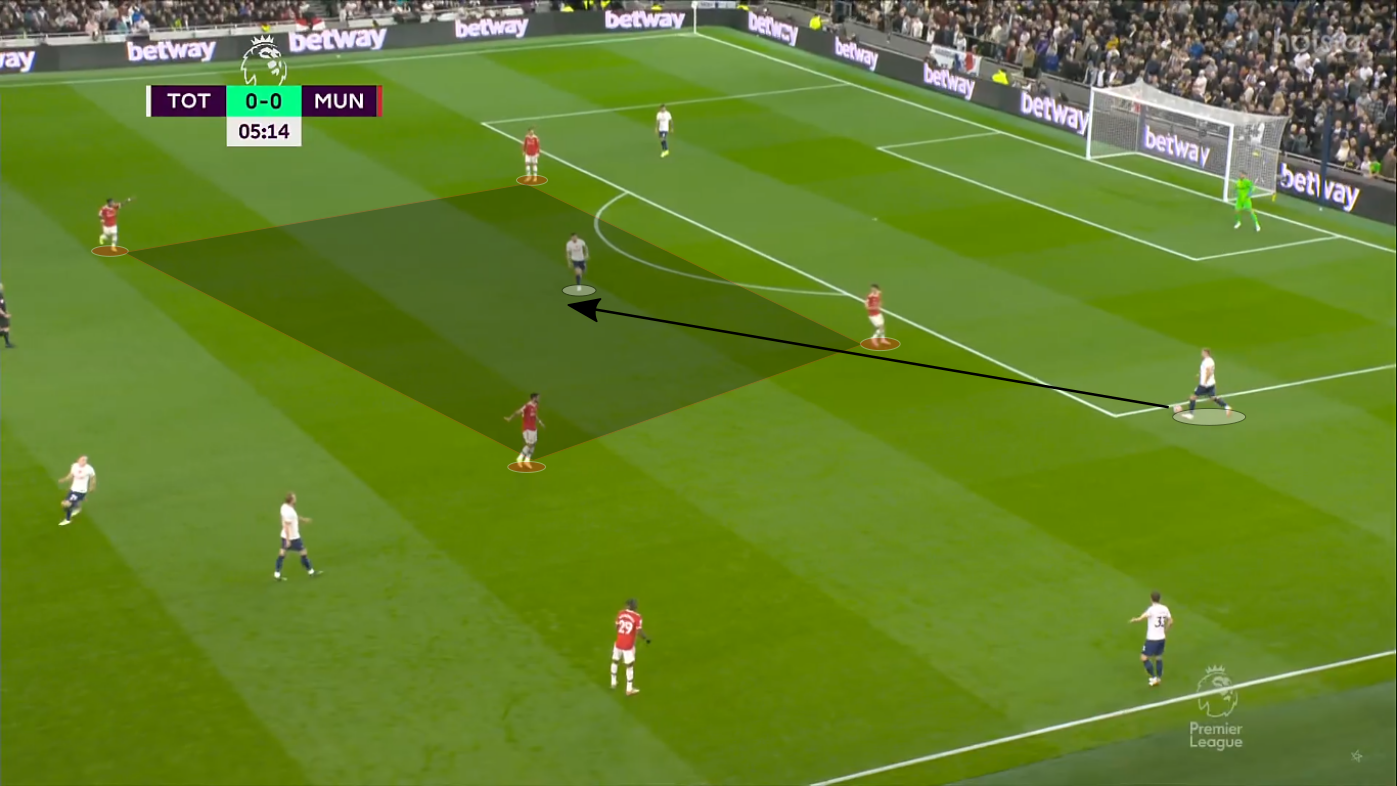 Manchester United’s visit to Tottenham Hotspur Stadium was likened to the TV Series ‘Squid Game’, as the heat was on both managers and the loser would inevitably face a severe threat of elimination from his job.

Ole Gunnar Solksjær certainly seemed to be working on borrowed time after watching his side get hit for five by Liverpool in their last match, so unsurprisingly he was the one who made changes to his line-up.

The 5-3-2 formation wasn’t entirely alien to the Norwegian manager – he had previously used it on occasion while in charge of United, often when his position was under some level of threat – but it was the first time this specific squad of players was asked to operate in it.

The scoreline alone might lead one to believe that United were excellent, but that was not quite the case.

Make no mistake, the Red Devils certainly deserve credit for the way they bounced back from the humiliation at Old Trafford, but the result was more of a case of Tottenham being completely flat and the visitors converting effectively every half-chance they were afforded.

The fact is, though, that United were still facing similar structural issues in defence as they have done all season.

Case in point: Their lousy high-block, which had a big hole in the middle once again.

In this phase of defence, the visitors left Scott McTominay back in midfield, so the front-two and two wide midfielders were tasked with defending from the front.

However, their lack of width meant that it was very easy for Spurs to simply work the ball to one side and play a pass into Pierre-Emile Højbjerg, who was their main holding midfielder.

So, in the space of a few seconds, Tottenham could go from having possession with a centre-back around the box to running at the opposition backline.

To Solksjær’s credit, it should be said that the issue had been mitigated to a slight extent. Having five men in defence is quite obviously better than having four while defending in transition, so this was the main advantage of the change in formation.

Edinson Cavani also deserves praise, as he worked his socks off to close down passing lanes while Tottenham had the ball on the left of their defence…

…and move across when the hosts had the ball on the right to cover the open space behind Cristiano Ronaldo, whose lack of defensive work rate is one of the primary causes of United’s struggles out of possession.

Therefore, it was hardly a surprise when the industrious centre-forward cramped up and had to be substituted off in the 82nd minute.

There is no way anyone – let alone a 35-year-old – can do this sort of defensive work week-in week-out, and the bad news for United is that Cavani is their only real option for this role.

Marcus Rashford and Mason Greenwood cannot replace the Uruguayan international’s pressing as they are in the 12th and 21st percentile for pressures applied per 90 among forwards in the last 365 days of the big five European leagues, while Cavani is in the 60th percentile.

The main reason that Solksjær’s side were not hurt as badly as the Liverpool match, though, was that Tottenham’s possession-play was terribly slow and similarly hopeless, so it became a classic case of trash vs garbage.

This was also why Cavani was able to cover all this ground to good effect – almost any other side would have been quicker in circulating possession from side to side and exploit the openings.

Additionally, as the match wore on and United amassed a lead, they could crawl into a deeper block, which naturally covered up the space in midfield as McTominay was no longer disconnected from Fred and Bruno Fernandes.

Game state also helped the visitors, as Tottenham have been particularly poor this season after going down.

In just 209 minutes of being in losing situations in this season’s Premier League, they have an Expected Goal Difference (xGD) of -3.0.

For context, their xGD while being one goal up is 0.75 in 235 minutes, so it is safe to assume that United’s new formation might have looked a complete flop if, say, Cristian Romero managed to stay onside for his goal.

Because of Spurs being that bad, the lower United block was hardly tested, so it is hard to say anything about how well that shape might hold up.

The sheer amount of individual quality packed in United’s attack is such that they can bag the goals in almost any formation or system.

Whether through Rashford or Cavani’s clever movement, Ronaldo or Greenwood’s clinical finishing, Fernandes’ creative genius or a spark of brilliance from someone like Paul Pogba or Jadon Sancho, the Red Devils’ front line always have multiple match-defining moments in them.

Of course, their productivity can be optimised through a system that plays to their strengths, but that is hardly the main concern right now.

The 5-3-2 unquestionably cripples United’s attack to an extent – mainly through the lack of wingers – but as this match showed, they can somehow find a way.

The bigger issue, though, is that the defensive gaps don’t seem to be plugged either, rather just hidden by a terrible Tottenham side.

Both of these things may have gone right on the night, but they are undeniably unsustainable, so it is clear that the 5-3-2 isn’t a long-term solution.

That conclusion takes us back to the point that so many have made throughout the last months: Solksjær is not the right manager to take this side forward.

The only thing that this win might have really achieved is elongating his stay, and in the grand scheme of things, that probably isn’t even a positive for United.