Tactical Analysis: Why Italy seem to be the most well-rounded side in the Euros 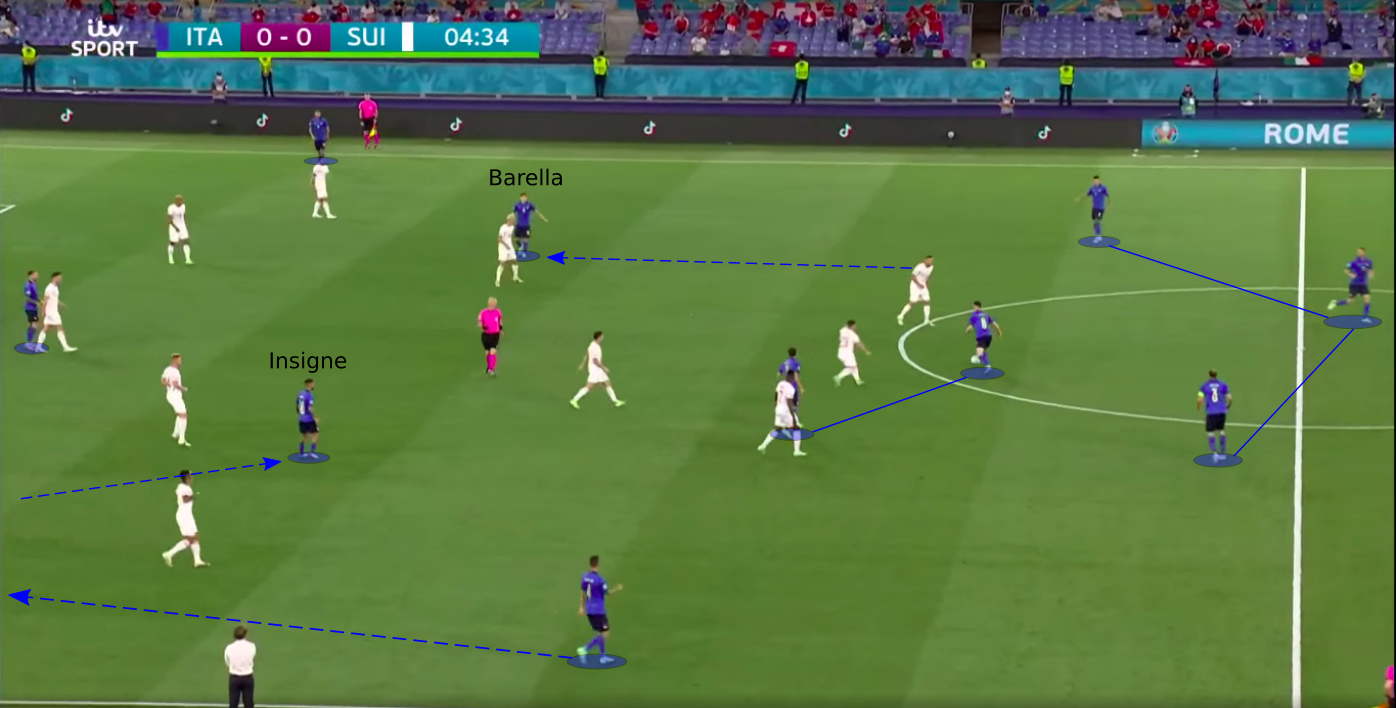 Going into the European Championship, most fans’ realistic favourites were either France or Portugal, maybe even England.

Italy were nowhere near that discussion, and given the fact that the 2018 World Cup was the first time that they failed to qualify for a major tournament since 1992, it is understandable that not many expected them to go all the way.

Their recent record, however, paints a very different picture. Going into the tournament, Italy had not been beaten in 26 matches in a run that went back to June 2018, while the last time they conceded a goal was in October 2020.

Something had clearly clicked for them, and two matches into the Euros, they look to be the most well-rounded team in the competition – almost too functional to be a national side.

In this analysis, we will take a look at how Italy have dealt with almost every type of situation in their two matches at Euro 2020, and why everyone should be taking note of their performances.

Marco Verratti’s absence for the initial matches due to injury led many to worry about Italy’s midfield, but it proved to be a blessing in disguise as Manuel Locatelli stepped in and did an unbelievable job in the two group games to date.

In possession, the Azzurri have a simple system transitioning from their 4-3-3. Locatelli and Jorginho typically stay back in midfield (although the former does have the freedom to make late forward runs on occasion), while Nicolò Barella pushes up in the right half-space.

This forces Domenico Berardi to stay wide on the right while Giovanni Di Lorenzo typically stays back as an auxiliary full-back, but on the left, Lorenzo Insigne and Leonardo Spinazzola have quickly formed a brilliant dynamic where one of them drifts inside while the other can hold the width.

This system has proven capable of playing through a low block, as Italy put three past Turkey.

Their first goal on matchday 1 originated with a line-breaking pass from Locatelli to Barella.

He then slid the ball into the path of Berardi, who was coming inwards from his wide position.

The Sassuolo winger then sent the ball across the face of goal, and in the end, it was turned in by a Turkish defender.

Italy also have the capability of attacking more directly, as they displayed in the build-up to Locatelli’s first goal against Switzerland, which started off with a brilliant long ball from the scorer himself.

Berardi then carried the ball for a good 35 yards to enter the box, before making a bit of room for himself and squaring it to Locatelli, who just had to tap it in.

Although the Azzurri have not scored from a set-piece yet, they did have a goal disallowed from a corner due to an unintentional handball, so it is clear that they possess a threat in such situations too.

They are quite calm against a high press as well, as was clear when they played through the Swiss high block effortlessly on multiple occasions in their matchday 2 fixture.

The stats back the Italians’ attacking versatility up, as they lead the way in the Euros in terms of build-up attacks as well as direct attacks with nine and seven each.

On the flip side, Italy are quite good at pressing. Their average of 2.5 high turnovers per game places them in the top three in these Euros.

Their 4-3-3 has held up very well in defence too (though it hasn’t really been tested too much), as is proven by the fact that Gianluigi Donnarumma has only had one save to make in both of his matches to earn two clean sheets.

Of course, as Italy face the ‘bigger’ sides in the knockouts, they will have to work harder to protect their goal, but so far, all the indications in this sense are positive.

Equally importantly, they have a solid squad to go with an established XI where the players have worked with one another for long enough to develop a very good understanding, which is usually the main stumbling block for national teams.

From a top-quality goalkeeper and experienced centre-backs to world-class midfielders to exciting wingers and an established goal-scorer, Italy have all the individual resources needed to go on and win the Euros, and the best part is that they are capable of working in unison.

Of course, France and Portugal still have the best squads in the tournament on paper, but Italy might just be among the favourites now thanks to their functionality.

With that being said, if there is one thing we have learnt from the under-21 Euros, it’s that tournament football is extremely unpredictable and the best team quite often does not win, so don’t place any bets yet.

Marko Arnautovic could be in trouble for alleged racist remarks
Morning Mix: Tottenham star has a point to prove, Chile have an unlikely hero