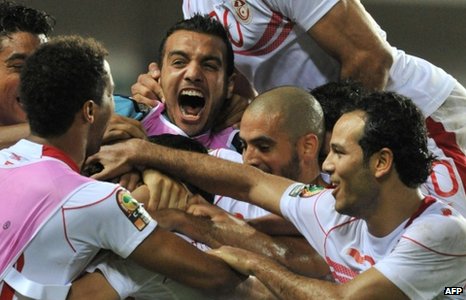 TUNISIA took a massive step towards qualifying for the last eight of the African Cup of Nations as they seen off North African rivals Morocco 2-1 in Libreville tonight.

In a game dominated by the losers Morocco, the Carthage Eagles got their tactics spot-on to counter attack when they could and scored through a free-kick from Khaled Korbi in the first half, later relying on a fantastic piece of skill from Youssef Msakni to give them a 2-0 lead.  The captain of Morocco, Houssine Kharja got a late consolation but it was too late as the Atlas Lions succumbed to a second straight 2-1 derby defeat to Tunisia.

The result will give a huge boost to the Tunisian’s morale and they are now expected to go on and defeat unfancied Niger next in the group, with co-hosts Gabon sure to cause Morocco problems on the same day. 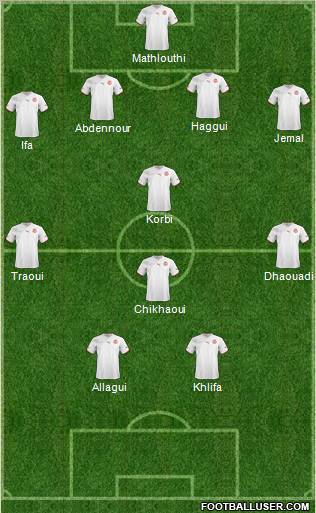 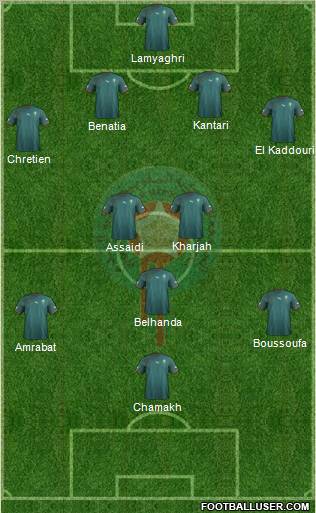 For Tunisia there was no place in the starting line-up for Amine Chermiti, who was a regular in qualifying for the competition, with Sami Allagui and Saber Khelifa playing in a two-pronged attack.  Highly-rated Oussama Darragi had to settle for a place on the bench for Sami Trabelsi’s outfit as Yassine Chikhaoui played the attacking playmaker role.  Morocco’s team also threw up some surprises, with a start for goalkeeper Nadir Lamyaghri who has not played since he was injured after the African Champions League final, and no start for Queens Park Rangers’ Adel Taarabt.

The first chance in the match fell to Karim Haggui, whose shot from a corner was well saved after being unmarked, the Tunisia captain knowing he should have burst the net with the opportunity.  Nadir Lamyaghri saved well to his left-hand post to concede another corner.  Five minutes later and it was the moment of the opposition keeper, Tunisia’s goalkeeper Aymen Mathlouthi, to produice a save.  He made a great one-on-one block denying Arsenal striker Marouane Chamakh after he was played through via a reverse pass.

In the early proceedings Morocco were starting to take control of the game and Mbark Boussoufa turned rapidly in the box to test Mathlouthi in the Tunisia goal, but the Etoile du Sahel keeper was there again to save well to his right and deny the Anzhi Makhachkala player.

As the clock hit 20 minutes Morocco were the dominant force in the North African tussle, Eric Geret’s side creating the better chances and dominating possession, and looking like a side on the verge of making the breakthrough in the game.  They were reminded of Tunisia’s ability however as left-winger Dhaouadi smacked the post with a powerful drive from the edge of the area on 22 minutes, the Moroccan goalkeeper Lamyaghri having no chance of reaching the ball and was relieved to see it hit off his right-hand side post.

The deadlock was broken just after the half hour mark when Tunisia won a free-kick, against the run of play, which Khaled Korbi converted after the ball averted everyone to finish in the back of the net.  Forward Khelifa tried his best to get his head on the long-range effort and seemed to claim the goal, but television replays showed the ball had went over his head without touching it, literally by centimetres.

Morocco pressed for an equaliser as Chamakh came close right on the stroke of the half-time whistle with a header, as he was met in the air by Mathlouthi , who got a hand to the ball as it just missed the crossbar on its way out of play.  As the half-time whistle blew, Tunisia went in winning by a solitary strike from Korbi but the Moroccans felt aggrieved as they had experienced the best opportunities and possession of the first 45 minutes.  With Morocco having a lot of the ball, the Tunisians were quite content to sit back and sook up the pressure with very little movement on the pitch, until they won the ball and counter attacked.  It was one of these counter attacks that led to the foul for the free-kick opener.

Adel Taarabt came on at half-time for Morocco and made an instant impact, forcing a save from Mathlouthi and creating a couple of corners.  He came on and played as a left winger, but drifted inside often and appeared to be given a free role.  The 22-yearold was obviously keen to show coach Geret that he had made a mistake in not giving him a starting berth against the Tunisians.

With around 65 minutes played the game was playing out much the same as the first half, Tunisia happy to be the team not dictating the proceedings.  Morocco had a fantastic opportunity to equalise, as substitute Youssouf Hadji trapped a long-ball forward beautifully, moved away from the defender just after the penalty spot but hit his shot well wide of the post much to the agony of his Moroccan team-mates and supporters.

He was made to pay for the miss as Tunisia grabbed a second and winning goal on the counter attack again, this time through substitute Youssef Msakni.  The 21-year-old midfielder avoided the challenges of three Moroccan defenders with some skill to get space inside their box, and fire a shot across the goalkeeper’s right-hand side which found the back of the net through a deflection off Mehdi Benatia.  It was the young man’s first international goal and is bound to have alerted some of the European clubs’ scouts to him, with him previously linked with clubs in Italy and Spain.  It was a crushing blow for the Moroccans but a fine example of the success of Trabelsi’s tactics for Tunisia.

Morocco captain Houssine Kharja managed to get one back in the 88th minute for Morocco with a half-volley following a corner which rustled Tunisia for the last remaining minutes.  A few scuffles enveloped as Tunisia tried to waste time and keep a hold of their lead, but an attack from Morocco almost led to a dramatic equaliser as the goalscorer Kharja came agonisingly close with a right-footed effort that just skimmed the cross bar.

As the full-time whistle brought the Group C encounter to a close, the Tunisians celebrated their derby success on the pitch.  Coach Trabelsi will have to warn his derby heroes against complacency as they are now expected to go on to defeat Niger on Friday as Morocco face co-hosts Gabon and put one foot in the last eight of the tournament.

Man of the Match

Tunisia goalkeeper Aymen Mathlouthi was touch-and-go to make the tournament after surgery on his finger but Tunisians will be glad he did as he made a string of impressive saves in both half’s to earn the man of the match and keep Morocco at bay.  8/10