African Cup of Nations 2012: The Key to Tunisia’s Hopes – Their Top Players

Having won the 2004 edition of African Cup of Nations, Tunisia are looking to repeat their famous and only victory at the tournament this year, and start off against rivals Morocco in the opening game of Group C on Monday.

The 2004 games were held in Tunisia and that played a major part in The Eagles of Carthage going all the way to lift the trophy in the 65,000-seater Stade 7 Novembre, the home of the Tunisian national team.  Of the starting 11 in the final against Morocco, in which they won 2-1, captain Karim Haggui and veteran Adel Chedli are the only players that have been selected in this year’s AFCON.

Tunisia are a much changed national team now and possess a largely youthful batch of players.  The 35-year-old midfielder Chedli is the only player in the squad over the age of 30, Anis Boussaïdi being the only 30-year-old in the Tunisian pool.  The average age of the squad is 25, with Espérance’s goalkeeper Moez Ben Cherifa being the youngest at 20 years of age.

The young Eagles will have to look to the experience of captain Haggui to do well in the tournament, but have some up-and-coming talent at their disposal that may shock a few of the worldwide audience.  They possess a group of individuals who were part of Espérance’s 2011 African Champions League-winning team, of which six have been called-up to the Tunisian squad.  Here’s a look at some of Tunisia’s key players;

Tunisia’s first-choice goalkeeper will be kept busy in a tight Group C against opponents Morocco, Niger and Gabon.  That is if he plays, because the 27-year-old had adductor and finger surgery in October 2011 and was expected to miss the whole tournament.  But he was named in the 23-man squad and could yet be the no.1, as he has been for several matches.  The 27-times capped player currently plays for Tunisian outfit Étoile du Sahel, the third-most successful team in the country.  If Mathlouthi doesn’t make the first game, expect Rami Jridi to stand in and keep his place as the keeper impressed in the 2011 African Nations Championships.

The captain of the national side and currently employed at Hannover 96 in the German Bundesliga, this experienced defender will provide the calm and organisation at the back that will be so vital in Tunisia’s chances of progression in the competition.  The former Bayer Leverkusen stopper, a towering 6ft 3ins, has 62 caps to his name and played in the 2004 victory in the final against Morocco.  He was the youngest member of the Tunisian squad at the tournament, appearing in all of the team’s six matches on their way to the title.  In the semi-final, he scored the decisive penalty as the team beat Nigeria 5–3 in a penalty shootout.

Haggui is confident of his team’s chances, citing the lack of a few big-name teams as a reason to be hopeful.  He told fifa.com: “Anything, and I mean anything, can happen at this tournament.  We have a very good and young team.  If we can improve from match to match at the tournament, we could yet go all the way.”

Club Africain’s pacey left-winger, Dhaouadi will cause opponents a lot of problems in the right-back area with his ability to beat another player and whip the crosses into the box.  The 24-year-old has been capped for Tunisia ten times in total since 2006 scoring two times, and played four fixtures of the 2010 Cup of Nations in Angola.  As well as the typical winger-type threat he has for the red and white of Tunisia, he can get goals from the midfield and that will be vital if they want to go on a long run and perhaps even win the competition.

The 14-times capped attacking midfielder Darragi will be instrumental in Tunisia’s attacking forays in the games of 2012’s AFCON.  At 24 years of age, the playmaker has already won the African Champions League with Tunisia’s biggest and most successful club, Espérance, and was voted as 2011’s best African-based player.  Darragi was pivotal in that Champions League triumph and will look to play a similar role for his country.  He plays in the centre of midfield in a deep-lying playmaker role or just behind a striker ‘in the hole’ position.  Opposition defences will do a good job in preventing this neat and tidy star from dictating play and creating chance after chance for Tunisia.  Darragi was also chosen as the best player in the Tunisian league for the year 2010.

Yassine Chikhaoui, who plays for Swiss club FC Zurich, is a similar type of player to Darragi and coach Sami Trabelsi will have a headache in whether or not to deploy both or just one of them.  Chikhaoui had top European clubs like Manchester United and Juventus watch him in the 2008 African Cup of Nations. 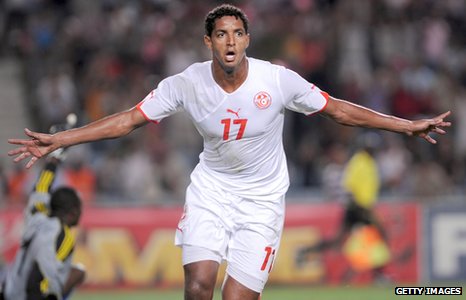 Tunisia’s all-time leading goalscorer was a major doubt for the squad and manager Sami Trabelsi delayed naming the squad to allow him to gain fitness.  He was named in the squad and despite some rumours of him being unfit enough to play in the group stages, he is still favourite to play against Morocco on Monday.  The Auxerre striker, who moved there from fellow French side RC Lens, has scored 26 goals in his 54 caps for the Carthage Eagles and was top-scorer in the qualification stages of the tournament, netting a total of six times.  It is debateable whether or not Jemâa will have a partner up front, but Tunisia have plenty of quality options with Sami Allagui, Khelifa and Chermiti ready and waiting in the wings if needed.