After a less than convincing victory against bottom of the table West Brom, Mark Hughes’s Manchester City make the short trip to Merseyside to face an Everton side brimming with confidence after reaching the FA Cup final. They defeated City’s bitter rivals, Manchester United, on penalties in the semi’s, before gaining a wonderful point in their previous match against their cup-final opponents, Chelsea. On the other hand, the recent results of the side from Manchester have been far from impressive, especially on the road, with just a solitary victory on their travels; a 3 – 0 hammering of Sunderland back in August.

The Toffees’ manager, David Moyes, is one of the most underrated bosses in the Premier League, having guided his side to consistently good finishes, always in and around the European spots, on a budget that is smaller than Shaun Wright-Phillips. He continues to make a plethora of fantastic signings, with the likes of Mikael Arteta, Tim Cahill and Phil Jagielka all signed for a fraction of their current worth. Currently, they lie in sixth place in the league, one point behind Aston Villa in the race for fifth spot, so will be pushing for a valuable win. City are tenth in the table as they head into this game, four points off the holy grail of seventh place, a position from which they would enter the Europa League.

Moyes has worked wonders in his time at Everton

With the season almost over, and with virtually nothing to play for, Blues boss Mark Hughes has hinted that he will be tempted to throw a number of youngsters into the fray in the coming games, with Northern Irish international Ryan McGivern, who has already represented his country before playing a match for City, and Slovakian starlet Vladimir Weiss likely to be the main beneficiaries of Hughes’s new-found attitude. However, the manager has more pressing issues for this match, with Argentinean defender Pablo Zabaleta, who will certainly run Stephen Ireland close for the player of the year trophy, ruled out for the rest of the season with a hamstring injury. After dropping regular right-back Micah Richards for the match against West Brom, Hughes will be reluctant to recall the England wannabee immediately, but he may be forced into doing so, as the only other viable alternative in this position, young academy product Shaleum Logan, has only featured once for the Blues in the Premier League.

January signing Nigel de Jong is a major doubt with a thigh strain, so disaster may striker for the Blues with the knowledge that Gelson ‘Awful’ Fernandes may be given a start. Hughes will wait upon the fitness of influential winger Shaun Wright-Phillips before naming his side, but the speedy international remains doubtful. Up-front, Craig Bellamy is sidelined with injury, but after playing in midweek for the reserves, Valeri Bojinov has thrown his name into the hat for a starting place, hopefully instead of Felipe ‘Please Jump’ Caicedo.

The visitors had a superb result and performance in midweek when they faced the might of Chelsea, but the point the Toffees attained from the match may have come at a cost as they now have a number of injury concerns heading into this fixture. In addition to long term casualties Yakubu and Victor Anichebe, Spanish midfielder Mikael Arteta and dependable right-back Tony Hibbert are doubts as well. In addition to these worries, Evertonare devoid of the services of Brazilian striker Jo, who is on loan from City. Whilst at the Blues, Jo couldn’t hit a cow’s backside with a banjo, but since his move to Merseyside, he has been banging in the goals for fun, including a brace against Bolton and another two against Wigan.

On-loan striker Jo is ineligible after joining Everton from City

Hibbert has been out of favour in recent matches, and was tormented by Aston Villa’s Ashley Young in his last match, so fellow defender Jacobsen has been handed the right-back role for the past few games, and if he is named in the starting line-up on Saturday, he will come up against Brazilian (star) Robinho, whose away form this season has been somewhat of a disappointment. Almost non-existent in many games, Robinho still possesses the ability to change a match in an instant, and City will surely look to him for inspiration.

The two Belgian midfielders will come face to face in what will undoubtedly be a bruising encounter. In the probable absence of Zabaleta and de Jong, Kompany will be asked to play in a defensive midfield role, a position which he is more than useful in. Fellaini, a £15 million summer signing, is dangerous in the air, though that is often with his worrying use of his elbows, but has been a revelation in his first season in the Premier League, so City, and Kompany in particular, will have to be on their guard. 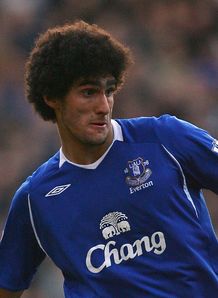 Fellaini has something in common with this person, but I don’t know what …

Many City fans still have lingering doubts over Bridge’s ability, but he is certainly better than Javier ‘I Spoke To His Parents’ Garrido. He is willing to get forward, but often struggles defensively due to his lack of aerial ability, and also the failure of Robinho to provide any support. Osman is one of the most underrated players in the league, and will be a major threat to City in this match.

Unfortunately, I feel City’s injuries will hamper their chances of getting a result from this match, and with the home side sure to work harder than my beloved Blues, they will run out victors. Goals to be scored by Valeri Bojinov, Louis Saha and Tim Cahill.