Manchester City were eyeing a repeat of the performance against Sunderland (their only away win of the season). I went into the game predicting a 2-0 loss, but the blue boys amazed me with their team ethic and work rate. I’ve not really got too much to say, other than well done chaps! 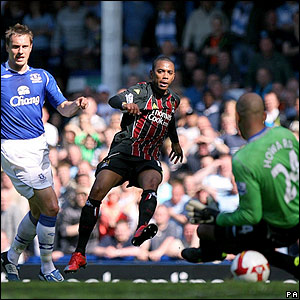 Shay Given (GK)– Shay didn’t put a foot wrong all game, wasting some valuable seconds at the end and making a smart save from the giant Fellaini after half-time which probably kept us in the game. Other than that save, there were no major saves he had to make, one 20 yard effort from Saha early on, but that was just a regulation save which he makes all day long in training. Looked pumped up as he wrapped his fists around the neck of Gosling towards the end of the game, who had just committed a tackle on him! Pleasing performance! 8

Micah Richards (RB) – Micah did an unusally good job today, until he got injured. At first glances, the injury looked similar to that of Alan Smith (when playing for United) when he charged down a John Arne Riise shot and broke his leg. I feared for the worst, but fortunately he was able to hobble off, unlike Jagielka who needed the stretcher. Never looked troubled today, looked sound, and reports of a bust up with Sparky certainly did not show. Much improved, I hope he keeps it up. 7.5

Richard Dunne (CB) –  Good, solid as a rock performance by the big man. Dealt with the forwards well and with confidence. Although he did almost score an own goal to take him to the top of the leader board! Showed real focus and got the team organised effectively. 7.5

Nedum Onouha (CB) – Did a very very good job at the heart of the City defense, especially in dealing with aerial threats. His concentration is simply impeccable and his timing is supreme. His speed is an area of his game which puts him ahead of most players and gives him the chance to make a last ditch tackle. That was certainly evident today, but he also showed some tidy leadership skills, telling people where to go for set pieces and also his shouting/communication was sound.
8.5

Wayne Bridge (LB) – Didn’t actually see much of Bridge today, but he had a very sound game. Did well to cover the classy Robinho and did well when defending against a strong Everton team. Was committed ( as ever), picked the right pass and his heading was excellent. Good game! 7.5 Nigel de Jong (CM) –  Did superbly well once Vinnie had dropped back to CB. His style of play complemented Ireland’s attacking nature very well. He never wimps out of a tackle but the only thing which let him down today was his occasional stray pass due to the lack of communication. However it was nice to see him have a pop at goal every now and again which shows us what a talented player we have in our team, he has all round capabilites. 7

Stephen Ireland (CM) –  Simply stunning. Ran back and forth for the whole 97 minutes and played some astonishingly good football with the likes of Robinho. His passing is amazing and the runs he makes are just fantastic. Hope he wins Young PFA Player of the Year, and I hope he doesn’t go to a bigger and better team. Top quality performance today. 9 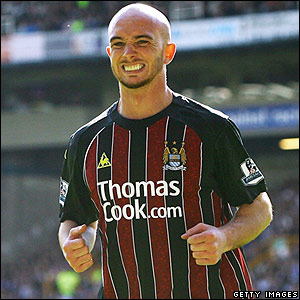 Vincent Kompany (CM) – A very brave performance, especially as he was marking his Belgian counterpart Fellaini! He is just so calm, cool and collected in possession which adds real stability to the City team, something which is really needed. He is the back-bone. Some crunching tackles on the likes of Osman really put the game in City’s favour. It made Everton fear us, they were timid and afraid to attack. Job well done. 7.5 Elano (RM) – Sent Robinho through numerous times and played some delightful football in midfield. Didn’t look as good as we have recently seen him, but that would just be incredibly hard to ask! Some balls were wayward, others were divine! You never know what you will get with these Brazilians, and that’s what makes the moments when they produce something extraordinary out of the hat so fantastic! 7

Robinho (LM) – Robbie was spat at by the Everton crowd which is an absolute disgrace. He was magnificent today, hope to see more of that at Old Trafford. He ran at defenders, looked lively on the ball, always found the right pass, tracked back and blocked a vital shot with 20 odd minutes to go. He really wanted to win today which is just sensational for someone like him. Usually he picks and chooses which games he is going to play well in, but he turned up and we saw the real Robinho. An outstanding shift from the Brazilian. Some good early distribution complemented Ireland’s dominance of the midfield. Created one and scored one cracker! Although my only criticism (which is why he gets 9.9) he should have scored 3 more! 9.9

Felipe Caicedo (ST) – Largely ineffective in the game, often very greedy whilst in possession, shooting when there was a perfectly good pass to Elano on the right. Very wasteful in that respect. Certainly no lack of effort, but just a shame there is a lack of skill and ability. I’m fine with young strikers having a chance, but surely now’s the time for a change Hughes? Give someone else a chance who will offer something more vital…like…I don’t know…a goal? 3.5 Manager (Mark Hughes) – From the first blow of the whistle, the team looked pumped up, ready to give it their best shot and not pre-destined for defeat which makes a nice change. His tactics looked good, a man on the post for corners (which we need) and some effective counter attacking play. 8.5

Gelson Fernandes (CM) –  Came on for the injured Richards and slotted in for Kompany. He doesn’t have the same physical prescence but he did a joob job and his energy got us going numerous times.

Martin Petrov (LM) – Game on for the unimpressive Caicedo, not a huge impact, but kept the ball when necessary! Felipe Caicedo (for just being so ineffective)