In the first derby of the year, Palmeiras made a great game against Santos: 4-1.

The goals was scored by Edmilson (former Villareal player), Keirrison (2x) and Lenny. This was the first match that Cleiton Xavier didn’t score in the year, but the mid-fielder made a great game, with the assist to Lenny’s goal.

Local media cereate a duel between th strikers of the teams, K9’s: Palmeiras’ Keirrison #9 vs. Santos’ Kléber Pereira #9. Palmeiras’s striker won the personal battle 2×1: against Santos’ he already scored 9 time in 3 games – last year, playing by Coritiba, he scored 7 times in the two games of the national championship.

Palmeiras is first in the regional championship, with 15 pts. in 5 games, one more than Corinthians, which has 14 pts. in 6 games.

Palmeiras vs. Santos is a historical debry: in the 60’s, the teams had the egemony in São Paulo football: Santos with Pelé, and Palmeiras with Ademir da Guia. With Pelé, Santos was always one step ahead, but when the king retired, Palmeiras became the best team of the state. 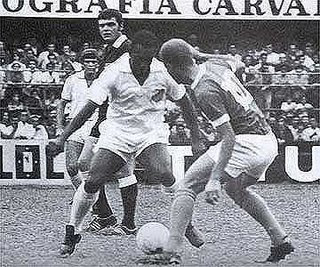 The key point in this match, as in the other matches of the team this year is the fast build-up play: Cleiton Xavier, Diego Souza, Keirrison and Willians are always passaing and running: the first touch passes made ir hard to the defenses do catch up the fast Palmeiras’ attackers, as in the last goal.

Palmeiras keeps the great run, with no defeats or ties this year: seven wins, scoring 21 goals and suffering only 4. The top scorers of the team are Keirrison (7), Cleiton Xavier and Lenny (with 5 each).