Where do Sheffield United rank in the worst relegated teams of the Premier League era? 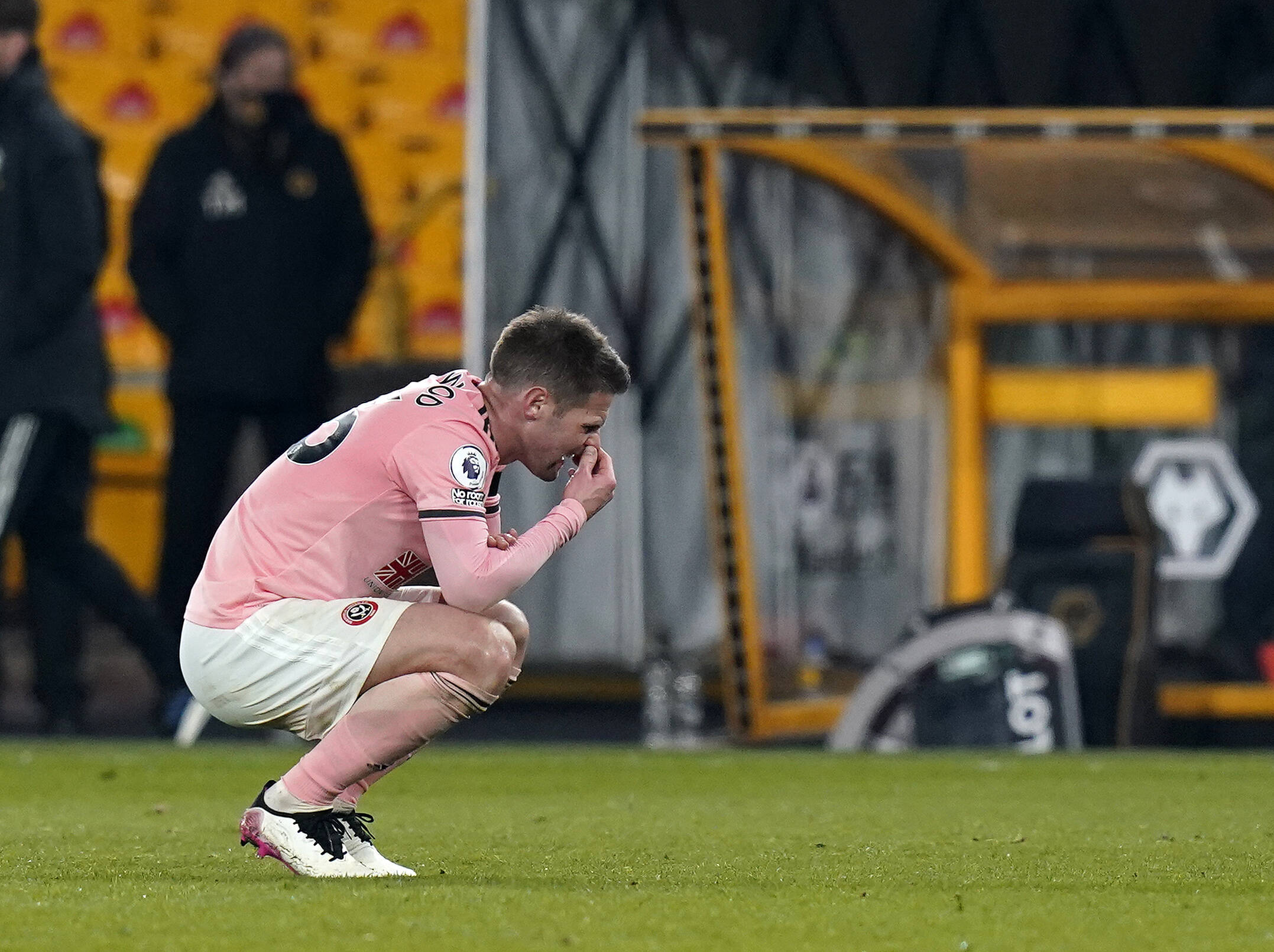 Sheffield United’s relegation back to the Championship was finally confirmed by way of a 1-0 defeat away to Wolverhampton Wanderers on Saturday, with the Blades still having six games left to play this season.

There’s no hiding the fact that this campaign has been a disaster for everyone at Bramall Lane, but just how bad has it been in comparison to others that have gone before them?

We’ve added four sides alongside them and created an infamous ‘worst five’ for analysis below.

There have been over 80 relegations from the Premier League since its inception in 1992, with some clubs relegated on numerous occasions, so there are a fair few sides to pick from.

That said, the easiest way to determine a set of the ‘worst’ ones is to look at their respective points totals, and that’s what we’ve done.

Sheffield United now have 14 points after 32 games, an average of 0.4375 points per game. In the sake of fairness, this is what we’re going to calculate their expected total by, and that would leave them with 16.625 points when the season ends.

Of course, this isn’t possible, so 16 is the figure we’re going to give them, picking up two points from an available 18 by the end of the campaign.

So, the ‘worst teams’ in the Premier League era by points alone looks like this:

We’re now going to examine these in more depth.

It goes without saying that no team at any level of football can be successful if they don’t score goals, and that has been a big issue for Sheffield United this season.

Summer purchase – and club record signing – Rhian Brewster has not lived up to his £23.5 million price tag, failing to score a single goal since joining in all competitions. That includes FA Cup fixtures against League One Plymouth Argyle and Championship outfit Bristol City.

In total, just 17 have been netted by the Blades so far in the league this season, amounting to 20 by the end of the campaign using the law of averages once again.

There are no guarantees that the Blades will score three more come the end of the season, and if they don’t manage to, they would become the lowest scorers ever.

Nobody has ever scored below 20 in a single season, even Derby – widely renowned as the worst Premier League side ever before this season – hit that figure:

One notable figure in the goalscoring department is that the Blades have had a better goalscorer this season in comparison to the other sides in this list.

David McGoldrick has grabbed six goals in the Premier League this term, level with Jordan Ayew (Villa 15/16). The top scorers for the other sides all had three of four goals at the end of their respective campaigns.

While scoring goals is great, any successful team also must have a good defence and stop goals going in at the other end, something that the Blades have been unable to achieve this season.

Last season – their first in the Premier League having been promoted – saw Dean Henderson as number one on loan from Manchester United. Fast forward a year and the Blades have had to rely on Aaron Ramsdale in goal.

Ramsdale was also relegated with Bournemouth last year, and this time around has let in 56 goals in 32 games.

Undoubtedly, Chris Wilder and now Paul Heckingbottom have been managing a side blighted by injuries all over the pitch but especially throughout the backline.

Jack O’Connell, Chris Basham, Jack Robinson, Phil Jagielka, George Baldock and Enda Stevens are amongst those who have been out for at least part of this season, and that’s just in defence.

However, there’s no denying facts and the fact is that the Blades have been conceding an average of 1.75 goals per game, expected to be a total of 66 by the end of the campaign.

That figure – albeit still poor – is actually the lowest of all five ‘worst’ teams, so in this category at least, the Blades will be able to say they’ve been the ‘best of the worst’ as long as they don’t ship more than twelve in their last six fixtures.

Unsurprisingly, given the scored and conceded analysis above, United are comfortably not the side with the worst goal difference (again unless they absolutely implode in the final six fixtures).

In fact, if they don’t lose heavily, they could actually again claim a ‘best of the worst’ in this category.

As it stands, Sunderland have the ‘best’ goal difference of the worst five on -43 in the 2005/06 season, the Bramall Lane inhabitants are expected to finish on -46:

A lot has been made of late regarding injuries across the Premier League, not just for Sheffield United but for some of the teams closer to the top.

However, the same can’t be said for suspensions. They’re more widely accepted but surely must fall into the same bracket. If players are available for selection, it’s clearly a benefit and being suspended prevents this.

Most of the time, a suspension will come from an accumulation of cards and that’s something that the Blades are all too familiar with having picked up 60 bookings, the highest figure in the league.

John Lundstram has eight, while John Egan and David McGoldrick have six apiece Added to this three red cards – joint third highest in the league this season – have been shown to the Blades’ players.

Of course, there are plenty of teams that have earned themselves more than these figures over the years and been nowhere near the drop zone, but it might have benefited United to avoid punishment from referee’s this season.

For reference, here’s how many cards the ‘worst five’ sides got. United are expected to end the season with 71 yellows and those three reds so they are marked down as 74 cards.

Moment of the season

While it may all feel ‘doom and gloom’ for Sheff United fans at the moment – and perhaps the fans of the other four clubs analysed in this article – it’s never all negative over the course of a season.

Not one club has gone down without a ‘moment’ to look back on, and to round off, we’re going to look at each side’s standout victory from their respective horror show seasons, without ranking them.

Sunderland (2005/06) – Three wins came the way of Sunderland in this campaign and it was the first which stands out, a 2-0 victory away from home against North-East rivals Middlesbrough. Tommy Miller and Julio Arca grabbed the goals, to get the Black Cats their first top flight victory in almost three years (including their time in the Championship)

Derby County (2007/08) – Paul Jewell’s Derby only got one win all season, and it came in September 2007 at home to Newcastle United. Kenny Miller marked his debut at Pride Park with a stunning strike from long-range and gave his side a 1-0 win.

Coincidentally, the Rams would also claim a point in the reverse fixture making Newcastle the only team in the division to not win at least one of their games against Jewell’s team.

Aston Villa (2015/16) – It was also three wins for Villa in their campaign but the most memorable one came on the opening day of the season away at then newly-promoted Bournemouth.

Having completed a ‘great escape’ the previous season, substitute Rudy Gestede leapt like a salmon and headed home to claim all three points at the Vitality Stadium. That win left them third in the table but sadly for the Villains, they then dropped like a stone.

Huddersfield Town (2018/19) –Huddersfield’s nightmare season actually had more memorable moments than most, and it’s a matter of opinion as to which is the ‘standout’. They managed three wins all season, and two of them – both considered for ‘standout’ – came against Wolves.

The first, a 2-0 win away in November, lifted them out of the relegation zone courtesy of an Aaron Mooy brace and an injury-time winner by Steve Mounié at the John Smith’s Stadium in February. However, their last home game of the season must also be mentioned.

A 1-1 draw with Manchester United may not sound inspiring, but they prevented the Red Devils from qualifying for the Champions League in the process and also grabbed one of just five total points post-Christmas.

Sheffield United (2020/21) – The Blades of course have six games left of what has been an awful campaign, but they have managed to grab four victories so far, the biggest of these coming against Manchester United at Old Trafford back in January.

Even with half a season left, most had accepted there was no hope and written Sheff U off, but a Kean Bryan header and strike by Oliver Burke secured a 2-1 victory out of nowhere. The three points did little for then Chris Wilder’s side in their relegation ‘battle’ but was a rare moment of passion and desire.

Are Sheffield United the worst side in the Premier League ever?

It’s important to note that the answer to this question is solely opinion based. The Blades have had a lot go against them this year, even before the season started when Dean Henderson confirmed he wouldn’t be returning to Bramall Lane.

Recruitment wasn’t the best and injuries have had a hugely negative impact on the squad. Fans not being able to back their side in person also hasn’t helped, though that’s the same for every team and has been since COVID-19.

When the restart happened last summer to conclude the Premier League season, Wilder’s side struggled and that hasn’t changed since.

That said, to go from ninth in the Premier League last season to comfortably the worst team in it is very poor.

Statistics don’t lie, and Sheffield United simply haven’t scored enough goals. They’ve also conceded too many even if that total isn’t as many as teams who have gone before them.

The Blades probably aren’t quite the worst team in Premier League history, but they’re a close second to Derby in 2007/08.